What’s On the Bike? Nippon Style! 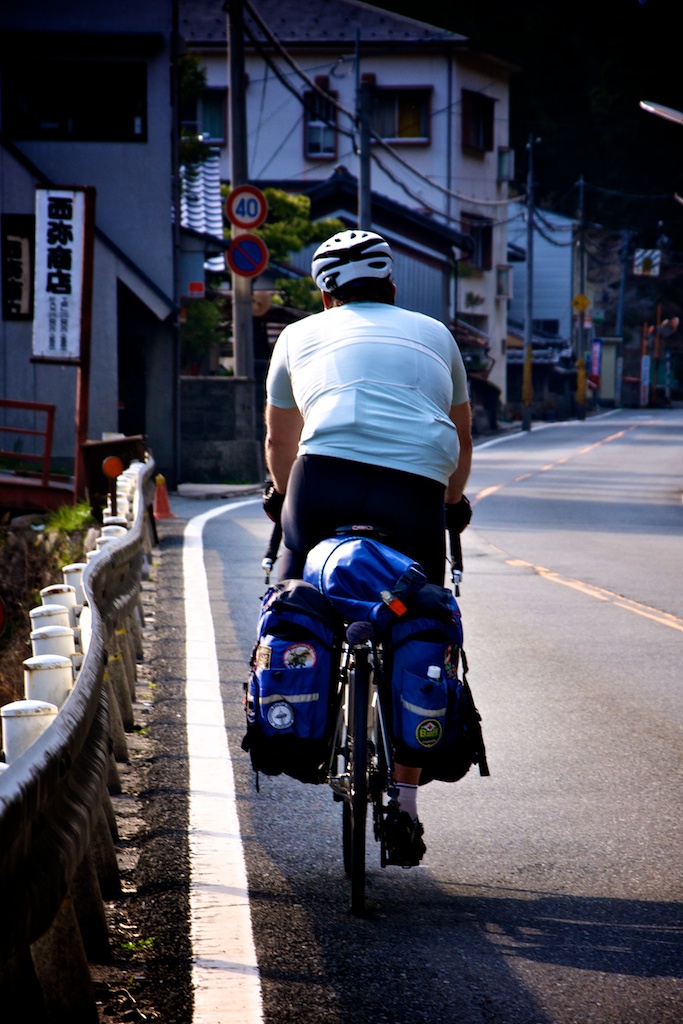 A couple days ago, I received an email from my pal, Mr. C, “I’d love to see you post on how to pack for a tour — especially the clothing part. What works, what doesn’t. I know that I tend to pack clothes that look good in only a narrow range of situations, but then again, I sleep in ditches.”

Thanks to Mr. C, I’d started reading Put This On, a blog dedicated to the skill of dressing like a grown-up, something rarely necessary in Seattle. This lead to me showing up at the hipster bar we drink together at looking like I’d just stepped out of a board room. I guess, Mr. C was thinking I’d have some new-fangled standards to maintain in Japan.

Japan is a mountainous country and I am fat. Everything on the bike would just add to the torture that my undertrained legs were going to have to heave around, slow us down, and complicate travel between cities when not on the bike. However, traveling in April with it’s unstable spring weather and with several days off the bike added a layer of complication. Would we need “dress clothes” for dinner? How does one dress to visit a temple?

Here’s what worked and didn’t in our bags and what I’d do differently next time I’m on the road.

Oh hell yes, I am a genius!

1. Wool Layers. Over the last several years my cycling wardrobe has become almost entirely wool and almost entirely from Rapha. Yes, it’s expensive, but it works and looks sharp. However, I think I am done with white socks or light colored fabrics on tours: impossible to keep clean.

2. Rapha Rain Jacket. The single best piece of cycling clothing I have. Works EXACTLY as a cycling rain coat should: keeps you dry without completely turing you into a rolling sauna.

3. Slip On Shoes. I gave up on the idea of having one pair of shoes on tour by using PowerGrips. What happened if it rained an the only shoes you had were soaked (as turned out the case on with our cycling shoes on night). But shoes are both heavy and awkward to back. Right before the trip, I saw a pair of Ecco loafers at the Mercer Island Thrift Store. They kinda of ugly, but they were very comfortable and what really caught my eye: light. Very light. I bought them and any time we got to to the temple, the shrine, the hotel, the tea room I was quickly ready to go in and out while Vic fussed around with his shoelaces. Take slip-ons to Japan.

4. iPad. Every since we started touring together Vic and I have been dreaming of the perfect piece of technology to take on a tour. The iPad is not it, but in the end I did leave my phone, nano, and real books at home and only took the iPad and I’d do that again. I probably read less on this tour than any other, but then I wasn’t having to let Victor have my “book” so he could play Fruit Ninja.

Seriously, what was I thinking?

1. Wrinkly clothes. I much prefer a button up cotton shirt to a t-shirt. But the shirts and pair of khakis I took looked like hell and there were no irons in any of the hotels we were in. There were odd trouser pressers, but I never figured out to use them. I didn’t need the khakis at all and it was cold enough that I never wore the short sleeve shirt (though we could have just have easily had a warm spell).

2. Swim suit. On my bike tour across Europe, I went swimming almost every day and made it a point to find the local swimming pool. If it was August, we’d be out swimming in the Sea of Japan but I didn’t see many swimming pools and most of the towns we were at along the coast were just fishing villages, many hardly had a restaurant, let alone a swimming pool. As far as needing them at the baths? NEVER, EVER, NOT ONCE did we encounter a mixed-sex bath and nudity is how bathing works (and ought to!).

3. Camping gear. We needed to go camping to preserve our budget. It was cold at night and without daylight savings, quite dark by 6:30. Given a choice between sleeping in a ditch and sleeping on tatami mats and taking a hot bath, well, there’s a reason they call it “Credit Card Touring”. For tours of two weeks or less, I’d really just recommend staying at inns if you can find a way to afford it. True camping grounds were few and far between.

4. Multiple lenses for camera. While I used the 50 mm and the Lensbaby, I used them very little. The reality for snapping postcard shots is that the 18-135 was good enough for most everything. I still had plenty of fun editing photos on the iPad. Next time, I leave the extra camera lenses at home.

5. Personal grooming suplies. Most of the baths and hotels had the basics you might need: a tooth brush, a razor, some lotion, hair tonic.

Japan is a lot less formal country that I was expecting and we never had a need for “formal” clothes. I wouldn’t have wanted to wear cargo pants with zippers everywhere, but jeans (which I know are heavy, but I feel comforted having on after a day of riding) were just fine. I took a very comfy henley along with the idea that I might need it for sleeping/hotel wear, but ended up using it many days as my shirts were so wrinkled.

I always over-estimate how much I’m going to be “out” while bike touring. The truth is that many days, after a full day of riding, I was quite content to be inside— warm, eating sushi and potato chips from the convenience store, and looking like a slouch or better yet, in my yukata!