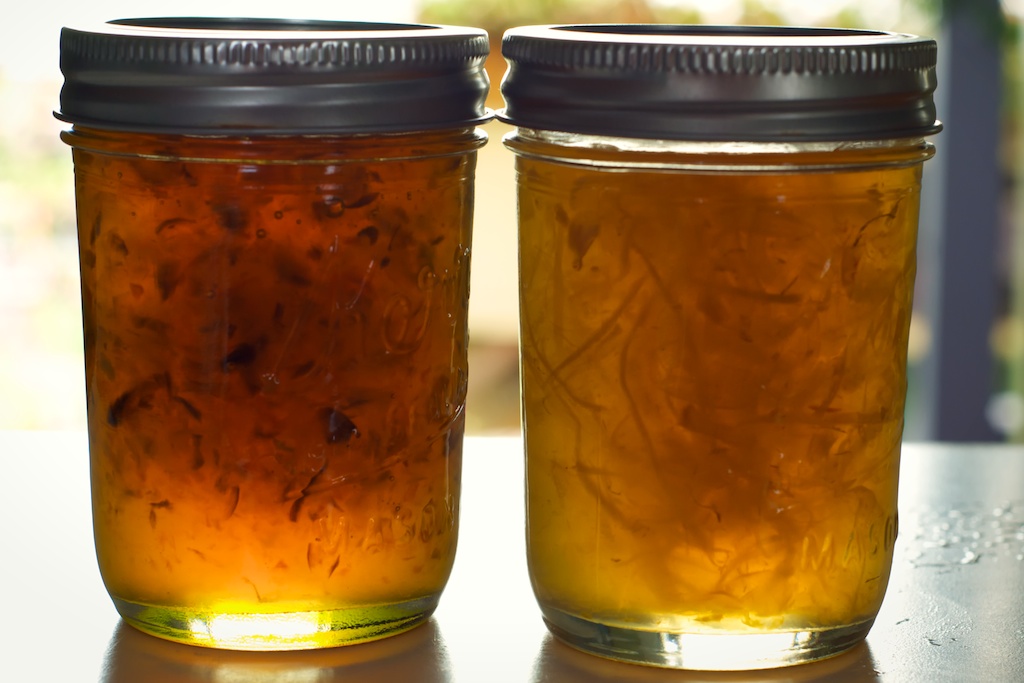 My bike riding pal Larry dropped me a note last week to see if I’d spend the morning with him showing how to make jelly. “I haven’t killed anyone yet!”, I cheerfully told Larry when he arrived. This was meant to assure him.

Canning is scary. There are times when I open the pantry and think to myself, “How long has that been in there?” or look closely at a jar and wonder, “Is this how this should look?” I just had batch of Green Apple Syrup that I threw out as it seemed that is was getting cloudier, not a good sign and not worth the risk. However, it was worth the exploration.

The basics for canning are pretty simple: keep it clean, keep it organized, and clean some more. You don’t need anything fancy to do it, just a box of jars and a couple pots, one to make the jam and one to boil jars in. There are tools you can buy like funnels and jar tongs that make canning easier, but if you’re just trying it out for the first time, you’ve likely got everything you need.

Larry had a plan to recreate a hot pepper jelly he used to buy for sandwiches years ago in Ellensburg. Pepper Jelly is a great first jelly to make because it is very quick to prepare. To find a recipe, he first turned to the Queen of White Trash Cooking, Paula Dean, and then branched out to some other recipes found on the net. I encouraged him to bring the ingredients that would make it taste like the stuff he had in Ellensburg, so instead of lemons he brought limes and he brought some cilantro, though I had my doubts, because it was in the jars he loved long ago.

I’m no master canner and I can be a vague task-master presenting three different options for how to do one simple thing. In canning, like life, there are many ways to do a right thing that will get you to similar outcome. If you ever invite yourself over to make some jam, I hope you leave my kitchen with a few pretty jars and a big boost of kitchen confidence.

Place chiles and peppers in food processor until finely chopped and starting to puree. The puree will give your jam the color, the chop gives your jam pretty flecks floating in it: get the balance you want! Combine the puree and vineagar and bring to a boil. Boil rapidly for 10 minutes stirring occasionally. Remove from heat and stir in sugar and lime juice. Return to heat, bring to boil again, stir in the pectin and boil again, stirring constantly for 1 minute. Quickly add the finely chopped cilanto. Bottle in sterilized jars. Give them a water bath of 10 minutes. Makes 10 half-pints jars.

Zest from a couple of the limes

Young ginger is tender and has not developed the tough brown skin of the regular ginger you are likely familiar with. Look for it in the refrigerated section of an Asian market. Typically, it’s only available in the late summer for a few months. As far as the pepper, I chose the pale sweet Hungarian wax peppers for just a slight kick and to make sure my jelly would still be a pale gold color. You could use whatever peppers you prefer.

Scoop out the ginger and pepper shreds and add enough of the liquid to get three cups. Any extra liquid you have (and you will likely have some) can be mixed with a bit of sugar and water to drink. Larry was drinking it up as a cold remedy. You could freeze it for later if you don’t have a cold the day you’re making jam.

Add the measured ginger, lime juice, lime zest and sugar to a heavy pot. Bring to a hard boil over medium high heat for 1 minute. Stir in the pectin and return to a boil. If you use a full bag of Certo pectin, you will get a very stiff marmalade. If you like your jelly a little softer (I do!), then don’t use the whole bag.

Put into your clean, hot jars and process in a water bath for 15 minutes.