Dutch Bicycle Intersections and Some Paint 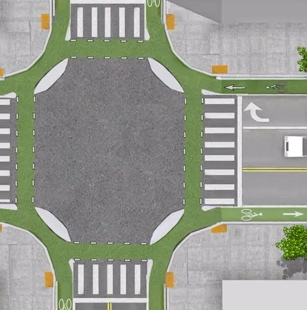 It has been a long time since I’ve been cycling in Holland. And yes, I do get tired of all the posts about how awesome urban bicycling is there and how it pretty much stinks everywhere else (except Portland). The only problem I recall with this design when I experienced in Amsterdam was actually as a pedestrian— there are so many bicyclists that it was often hard to get across the bike lane to cross the street!

I am often in bicycle lanes throughout Seattle. Over the last several years, after another right-hand turn fatality, many of the crossing are getting a splash of paint. It’s meager for sure, but what I’d also like to see is some ticketing for cars that cross or park in this zone. It’s often safer to ride in the street, and cars don’t get this, than in the bike lane,s if there’s a lot of parking going on, UPS deliveries, and bus stops. It doesn’t help that we have many types of bike lanes in different parts of the street (2nd Avenue! What a mess!) Until we start to get serious about more dedicated bike lanes —and we’re not going to get folks really riding in numbers that build sustainability until we have them— we ought to be enforcing the idea that bicycles have a right to the road.