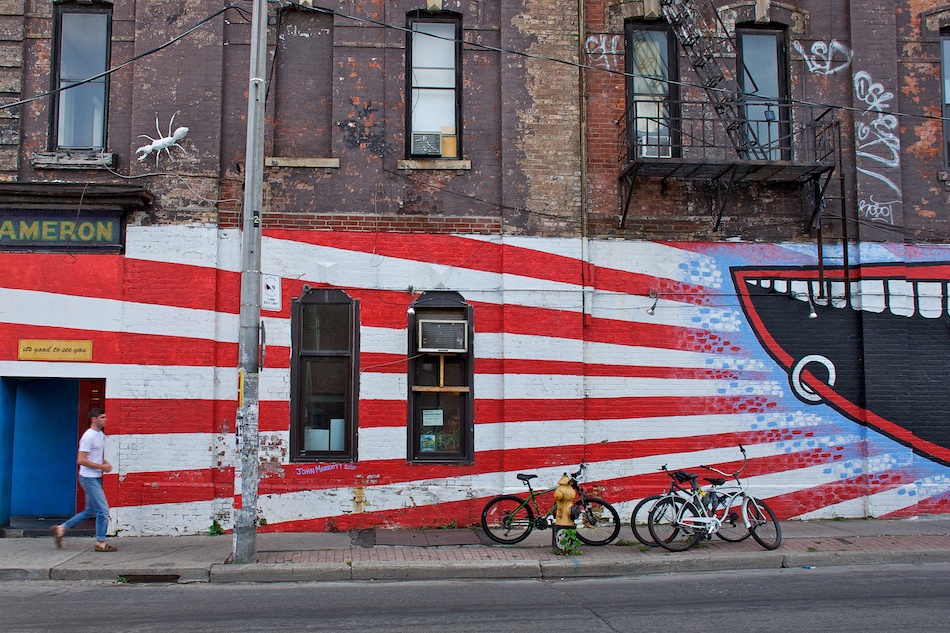 One hears all the time that Toronto’s a great city, like New York, but in Canada’s frozen tundra and with eskimos.

Having never been, I couldn’t say. I knew it was larger than you’d ever imagine — who would want to live in a place with such horrid weather?, but I also thought it was next to Detroit. For me, Toronto is just a name that shows up on fancy, but not too fancy, shopping bags.

Over the summer, I’ve been learning a lot about web accessibility for vision impaired users. My own site, a complete and utter fail. The client is based out of Toronto and we had the chance to go back and observe folks using some of the systems I’ve been working on changing. It’s a challenge like I haven’t had in a long time, in a very good way, and despite my years and years of working in user experience, really exposes how much a sighted user takes for granted and how often the mandate for accessibility is just lip service.

For the first several days, I stayed near work. I can’t even recall if we left the suburban hotel for a meal. Not unpleasant per se, as it wasn’t -10 degrees and probably more representative for how people actually live in the area: think flat, cars, strip malls, boring. As with so many work trips, you’re nowhere near the actual city you’re telling others you’re in.

Not quite a full weekend, as my flight left early on Sunday, when work wrapped up Friday afternoon, I switched hotels for one downtown and laced up the walking shoes.

There may be eskimos and snow machines around, but I didn’t see any. Nor did I happen to see any shopping bags with New York, Paris etc etc typed across them. What I did find was an incredibly eclectic, walkable city that was a pleasure to be in. Is it like New York? No, of course not. Perhaps more like Chicago, but no that doesn’t seem right to me. On even such a short stay, I think it’s wholly just Toronto.

I was surprised how low-rise most of it actually was, and how the further you were from the lake, the more vibrant it felt. From what I could ascertain, there’s a lot of animosity about the spread of high-rise condos that are sucking the life out of the streets and actual neighborhoods. Like looking at a map of San Francisco and then going for a walk, it’s suddenly much larger than you’d ever guess and despite blisters and near-heat stroke from walking a full evening and most of the next day, I only walked around neighborhoods on the west side of the city, never venturing over to Greektown.

My notes have things like “go back to look at video installation”, “see about cute tie for Vic”, “get tix for fringe fes”, but truth is the city was big enough, I never did get back to follow up on anything that caught my eye.

On Saturday morning, I wandered over to the Farmer’s Market held on Saturday mornings across from the St. Lawrence Market. I flirted a bit with a very cute lad selling biscuits who gave me some tips on things to see and learned that the real snows happen north of the city and they have a name for that location other than Frozen Void of Doom. They actually have sheep that live there, warm all winter in a barn, and they make delicious cheese.

If I was underwhelmed by the ROM, it was perhaps because I was too tired to deal with the odd space, but the walk back toward the hotel was perfect. At some point, that late afternoon, I passed a bar with men speaking Portuguese outside and having smokes, while inside a small band played sambas. Brazilian? Portugese? I’m not sure. But I grabbed a table, and let one beer follow another as the waitress occasionally showed up with tapas. Not fancy little over-priced dishes, but true dishes of food meant to be consumed while drinking cold beer. Addictive spicy flat beans that you pinched the skin off while popping them in your mouth (the waitress had to tell me how to enjoy these), chicken wings, peanuts. Cash only, please.

I’d have really liked several more days in Toronto. I’d like to go back with a bit of money and an attitude for some shopping, and it would be fun to have Vic around to listen to the music and to really make sure we made into one or two of the local theaters. When I got back I told Vic, “Next time we’re in the mood for a trip to New York, let’s go to Toronto instead.”

Yep, I guess I heart Toronto. In April. In May. In October. 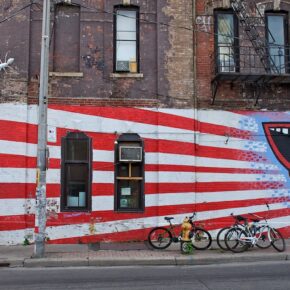 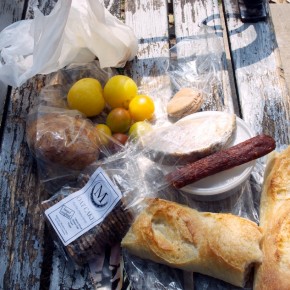