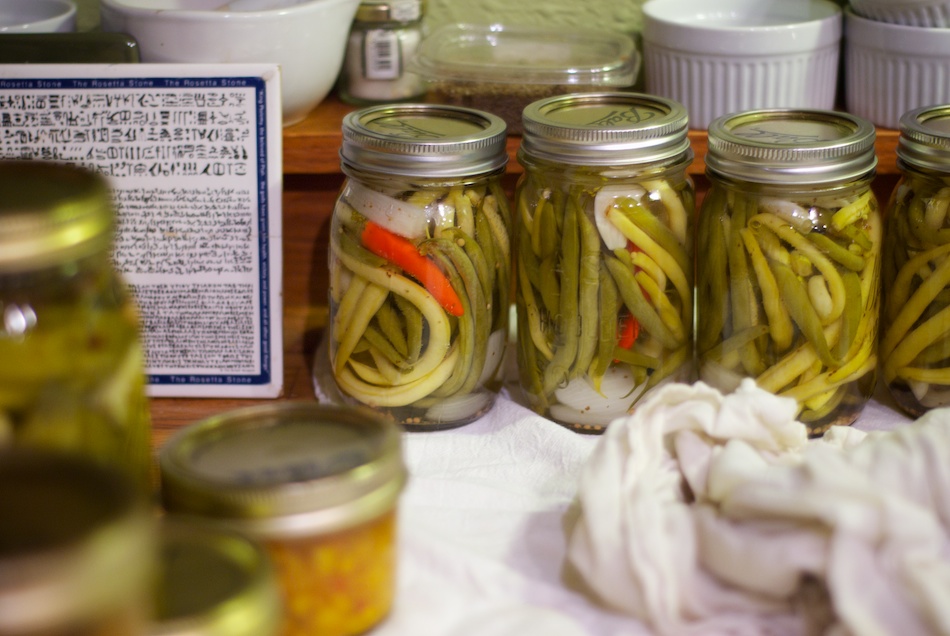 Dilled beans and a jar of pickled corn

Making pickles isn’t that difficult, but they elicit a bit of wonder when I bring out a jar for what usually seems an impromptu post-adventure meal with our pals. I wouldn’t claim my pickles as extra-ordinary, but they definitely are forethought and everyone knows they come in limited quantities, so in that way, they are indeed something special.

I don’t have a set of identifiable pickle recipes yet, but it’s safe to assume that Victor is not the only person who will be disappointed that I completely missed cherry season so there won’t be any pickled cherries showing up after a long rides or to eat with paté this winter. Lisa, while completely willing to make do with this year’s over-brined beans for Bloody Mary’s is going to have to drink them here with me as there only a few jars I’m hoarding. About the only thing I’ll have in quantity this year is Green Tomato Chutney: amazingly delicious and until I started giving it away almost every year, utterly unknown to my Northwestern pals, despite Seattle being the land of the green tomato.

This year my friend Mieko came over to learn the art of pickling and preserving. What I think she learned is that there’s not much to it: keep everything clean as possible, hot, and while there’s basic rules as for brine ratios or cups of sugar, don’t be afraid to get creative based on what’s at hand. We visited the farmer’s market to see what was there, came home and flipped through my books and spice drawer and got to work cleaning not only the cucumbers we picked up at the market, but the many pounds of plums from that morning’s Community Harvest.

Here’s what’s in the pantry this season:

Dill Pickles
Dilled Beans
Pickled Corn Relish
Italian Plum Ginger Jam
Turko-Italian Plum Jam (It’s like an alliance from the First World War, but spicy good)
Pickled plums with Star Anise
Green Gage Jam (from our own tree)
Old-Fashioned Pear Preserves
…and a few boxes of jars are sitting on the floor waiting for the cooler weather and Victor to give up hope of any more tomatoes ripening!

I currently use two older books for reference and ideas, both came as out-of-print special orders.

The Complete Book of Pickles and Relishes by Leonard Louis Levinson. Written in 1965, you’re likely to find recipes for pickling ten bushels of cucumbers and five gallons of vinegar on the very same page as Edna from Great Falls’s much more reasonable three quart recipe. It’s a very mixed bag, but if you want to pickle something, you ought to be able to find it in here: I can’t imagine a book more comprehensive and at times, more baffling (though in a way a cook ought to enjoy).

Recommended by Tara Austen Weaver (herself a fine preserver), Fancy Panty by Helen Witty. It’s here that I first learned about pickling cherries, though I only partly followed her recipe and had no complaints for my deviation. This book’s focus is much broader than just pickles and jam, and if you’re into having a well-appointed larder filed with delight, it is essential.

Pickling and preserving seem to be making a bit of a resurgence, so I’d be curious to learn what books or resources you might be learning from. Leave me a note if you’ve got a favorite recipe that I ought to know about.

Sources from everywhere – some are 50 year old family recipes, some from friends, some from books and magazines – plus lots of adapting/tweaking.

I’m on the search for a asian style plum sauce – actually made from plums.

It sounds like you’re making awesome stuff to put up. Thanks for the tip on the choke cherries. We planted one and I knew that the juice was popular as a tonic in Russia, but I’d not thought about making jam with them. I’ve been surprised that the birds haven’t gone for the fruit at all on it, such a pretty shrub!

I think I’ve found you a Chinese Plum sauce recipe. There’s one in Nigella Lawson’s How to Be a Domestic Goddess. It’s a book that was given to me as a gift and one I’d have never thought to buy on my own, but it is one I use quite a bit with good luck. I really enjoy her common-sense approach to cooking and what might or might not be in your pantry!