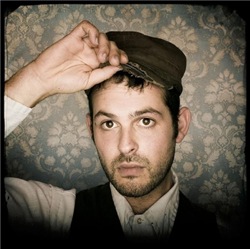 For the past month, this recording has added some hope as I’ve struggled through a lack of sleep, a return to dreary spring weather in the Northwest, and the quiet dissatisfaction with life and the choices made. It’s quiet, produced beautifully, and emotionally and lyrically mysterious. It’s exactly the type of music I love most.

Gregory Alan Isakov is South African by birth, but sounds quintessentially Western: but then what’s the affinity of the West but to drift? This record is not so much about here (or his adopted home of Colorado)— though when he sings about snow, the mountains, the sea; the land is mine— but the immigrant and finding home and losing that home.

In this, he feels different than John Ritter, with whom he’s often compared. He’s got a similar voice and range, and in the more produced songs there’s a similar sense of sound and richness. Ritter feels inherently most at home in the language of the West and his imagination and lyrics feel tightest when tied to the land and our shared mythologies about it. Isakov not so much so. Not to say there’s the cliche of going in his songs, but there’s an affinity in his music where it’s the most natural thing in a world of pioneer music to sing about the sea you’ve never seen, that far side of the mountains, the leaving, the letters sent and never returned.

It’s as if Ritter is the station, Isakov the rail between.

You can listen to snippets from This Empty Northern Hemisphere here.

Alas, there aren’t many decent sounding YouTube videos from this album, but there’s this great version of “3 AM” from his previous record, That Sea, The Gambler.