The Southern Suburbs by Bicycle 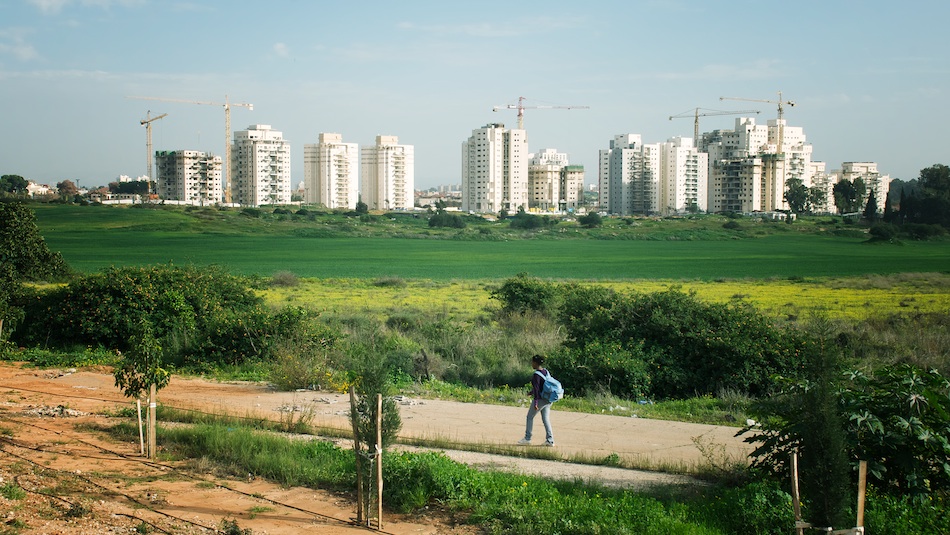 Our hotel is right on the beach in the tourist zone. There’s a promenade there filled with joggers, cyclists and walkers. To our south lies the old city of Jaffa. A port in antiquity, it was the principal city on this part of the coast until Tel Aviv eclipsed it in the 30’s and 40’s.

I know this from the guide book. Further south: mystery.

Wrapping along the boardwalk, the next city is Bat Yam. While there’s a “beach zone” on the map, the city is up on the cliffs and doesn’t appear to have the same number of hotels or amenities. From there I rode into some industry in Holon, before crossing into malls in Rishon Letziyon. Like most suburbs finding a bite to eat can be tricky, but I did luck into my favorite food thus far on the trip served by an old lady dressed in black and covered with a white shawl: a flat bread (lavash?) warmed and slathered with labneh, tabouleh, and then sprinkled with zahtar and hot peppers.

My plan was to head south somehow to Ashdod, but I could not find a road south other than the highway on which bikes aren’t allowed. So instead I continued east to Ramla. Truth be told, I thought this was the town that is often in the news for oppressive news and riots, but in fact, that shows my ignorance as that’s Ramallah in the West Bank.

Ramla is a small town. It does have a historic center where Napoleon was said to sleep and a small but lively market where I drank some lemonade, ate some interesting and delicious pastry while being eyed by the crowd. Lycra is something that makes little sense in touring the Middle East…I need some shorts tomorrow for Sunday’s bike ride.

I could see the hills in the distance and knew somewhere beyond was Jerusalem. It also looked like I could finally leave the sidewalk and bike safely on the shoulder of a regular highway to get there, but with my late start in Tel Aviv, very slow moving through these cities on sidewalks, false routes, and picture taking, I decided the best course of action was to take the bus back with my bike underneath. As it’s the start of the weekend here, the entire Israeli army was riding the bus with me and crowding the many stops on the way out of town.

It’s easy to like the Tel Aviv that is within an easy walk of our hotel: lots of cafes, beautiful people, surf and sun. Coming into the city tonight, I was let off at the Central Bus Terminal to the east of here and in a part of town I’d not been to yet. That Tel Aviv is different. Junkies laying on the ground, men gambling in small groups, and people selling what they could gather on the sidewalks.

The steam from street food rose along the sidewalk as night began to fall and I turned my flashers on and pointed my bike to the west and the tall skyscrapers that I recognized as being near the hotel.