I like looking at street art: stencils, stickers, and tags. Most of the time, it’s just blight, but it is an additional layer on a city that intrigues me.

Most often, truth be told, I like the removal of it. I’ve called the city to remove tags on our neighborhood stop signs, but then as I’ve mentioned before tagging isn’t really much of art as it is signing and turf making. There’s not much to it to admire. In Seattle, the most common form of public marking isn’t even tagging, it’s using stickers that are then “tagged” with a pen: that’s called leaving an autograph but not having the skill or the balls to do it with paint. It’s not interesting and it’s blight.

We’re in the tourist zone of Tel Aviv, right on the beach and behind us are some of the city’s most trendy neighborhoods. This part of the city is seriously tagged, stenciled and otherwise altered from the planned colors and forms of the buildings, which are in many cases losing stucco and in need of repair. It seems that the general interest of society here is not on the specific exteriors of their buildings. I’ve not seen as many interesting manifestations of street art in such a small area before.

While I have not spent much time in the suburbs, it appears to me that there is less tagging and art otherwise in the main common areas, though as might be expected it shows up on fences, freeway underpasses and bus stops.

Now a few words before you look at the gallery.

I do not speak Hebrew nor do I have cultural reference for these which for me adds to the mystery but certainly limits the conversation. Which are ad campaigns for multinationals? A few appear to event notices, but what kind of events? The line between street art as a bottom up statement and a marketing campaign to the counter-culture has always been slim, and here it may be slimmer than ever and I wouldn’t know it.

It’s quite possible that some of these are offensive to one group or another (we’re in the Middle East), but I really can’t tell. If you know, I’d like to as well (this blog is not condoning any more misery in the ME for anyone…we’re all about hearts, flowers and unicorns for everyone…)

Certainly more than one are particularly interesting for the framing and what’s around it, not only in the real world, but by my choices as a photographer. That the nature of documenting scribbles on the wall.

Plenty of the work is in English, which strikes me as appropriate given the cosmopolitan nature of youth culture and certainly, there exists global community interested in street communication and signals.

Finally, here’s my overall take on the form: there is tagging everywhere. I’m not showing it, some of it is interesting only because it’s in Hebrew (and therefore right to left), but it does not overall interest me. Stencils are wildly popular here, though surprisingly there were many of them I only saw once (you tend to see these in groups over the course of several blocks). Pasting is also much more common than in Seattle. While I saw lots of interesting examples, I didn’t see any that felt made for a specific installation, except for the ones on telephone exchange boxes which are designed to size. 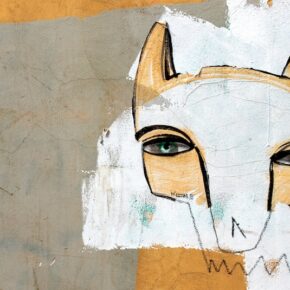 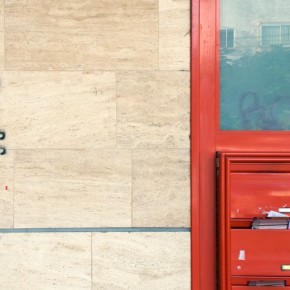 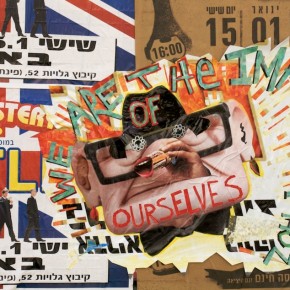 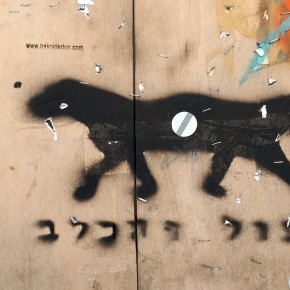 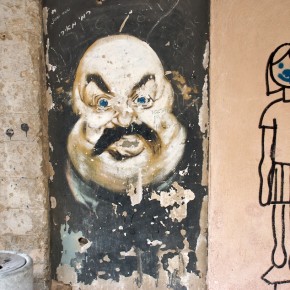 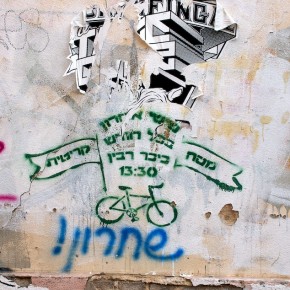 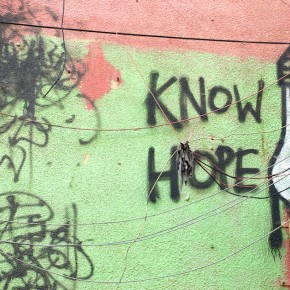 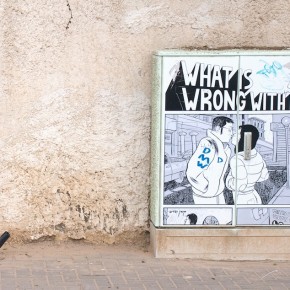 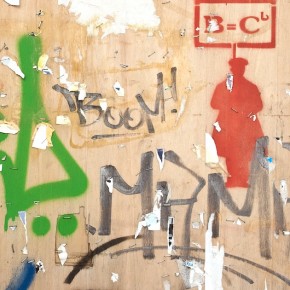 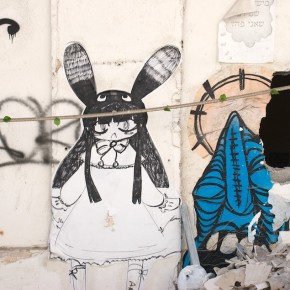 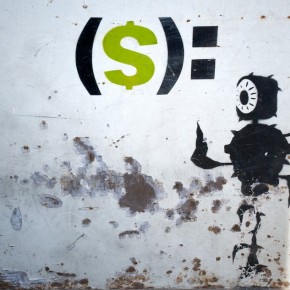 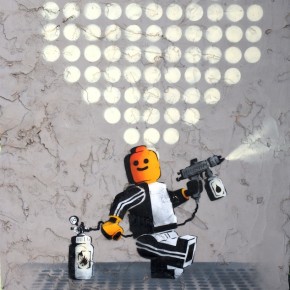 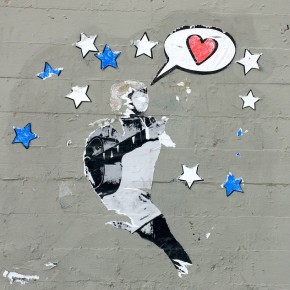 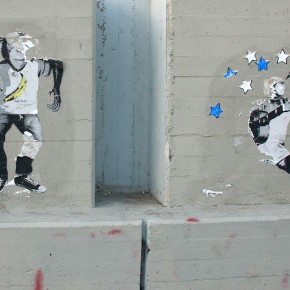 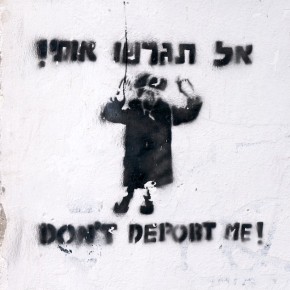 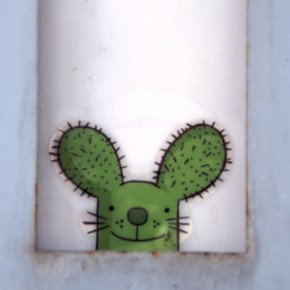 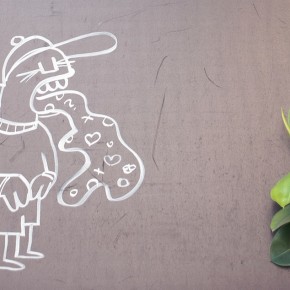 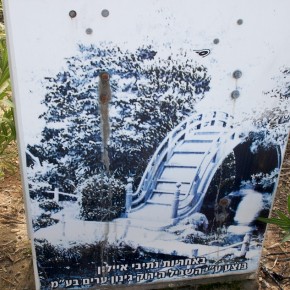 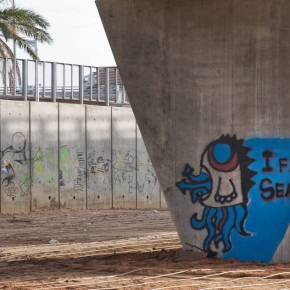 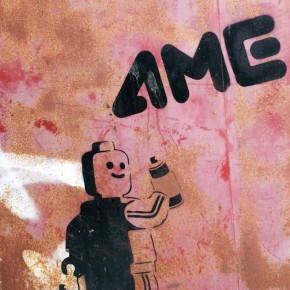 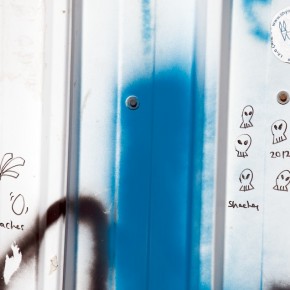 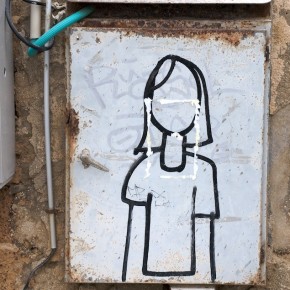 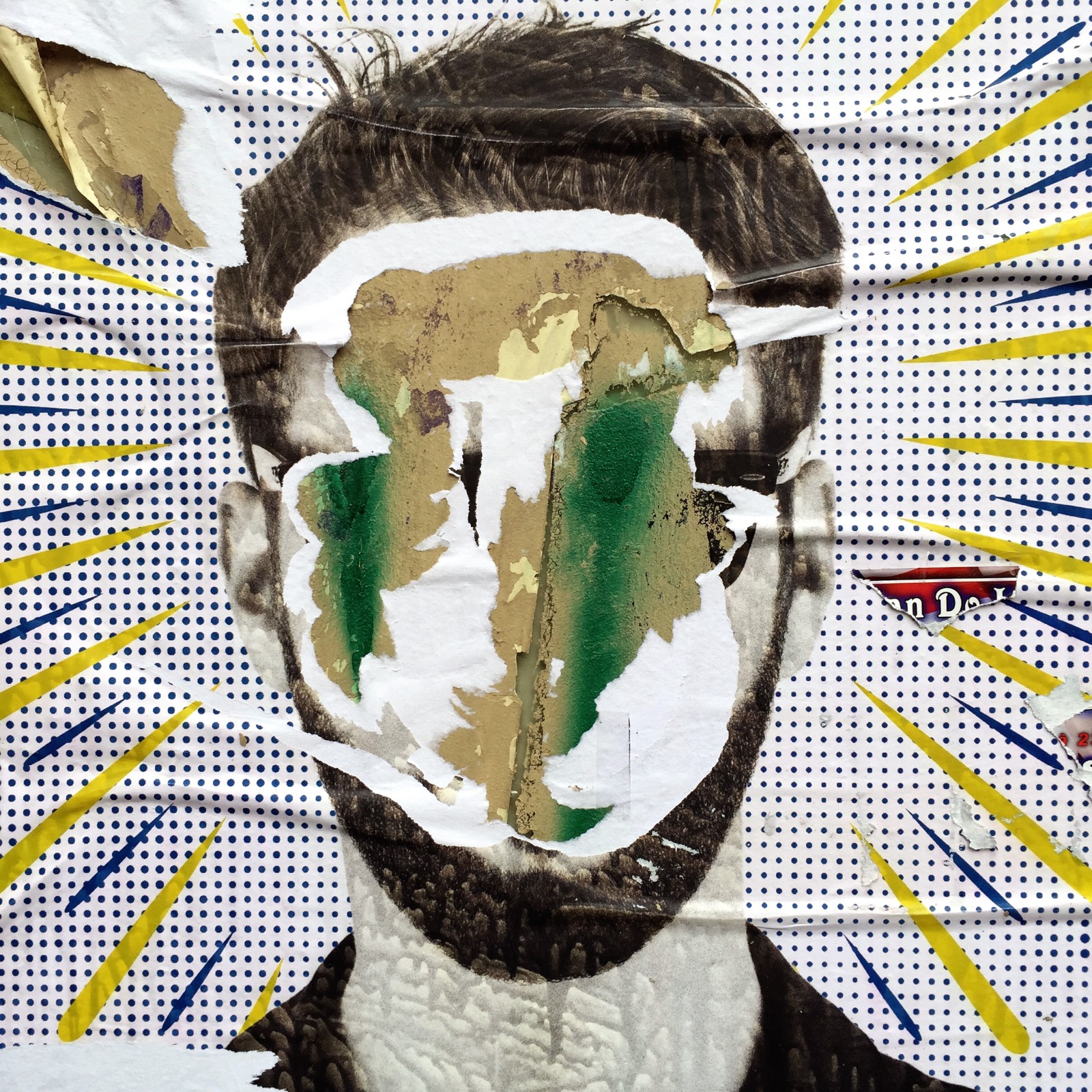 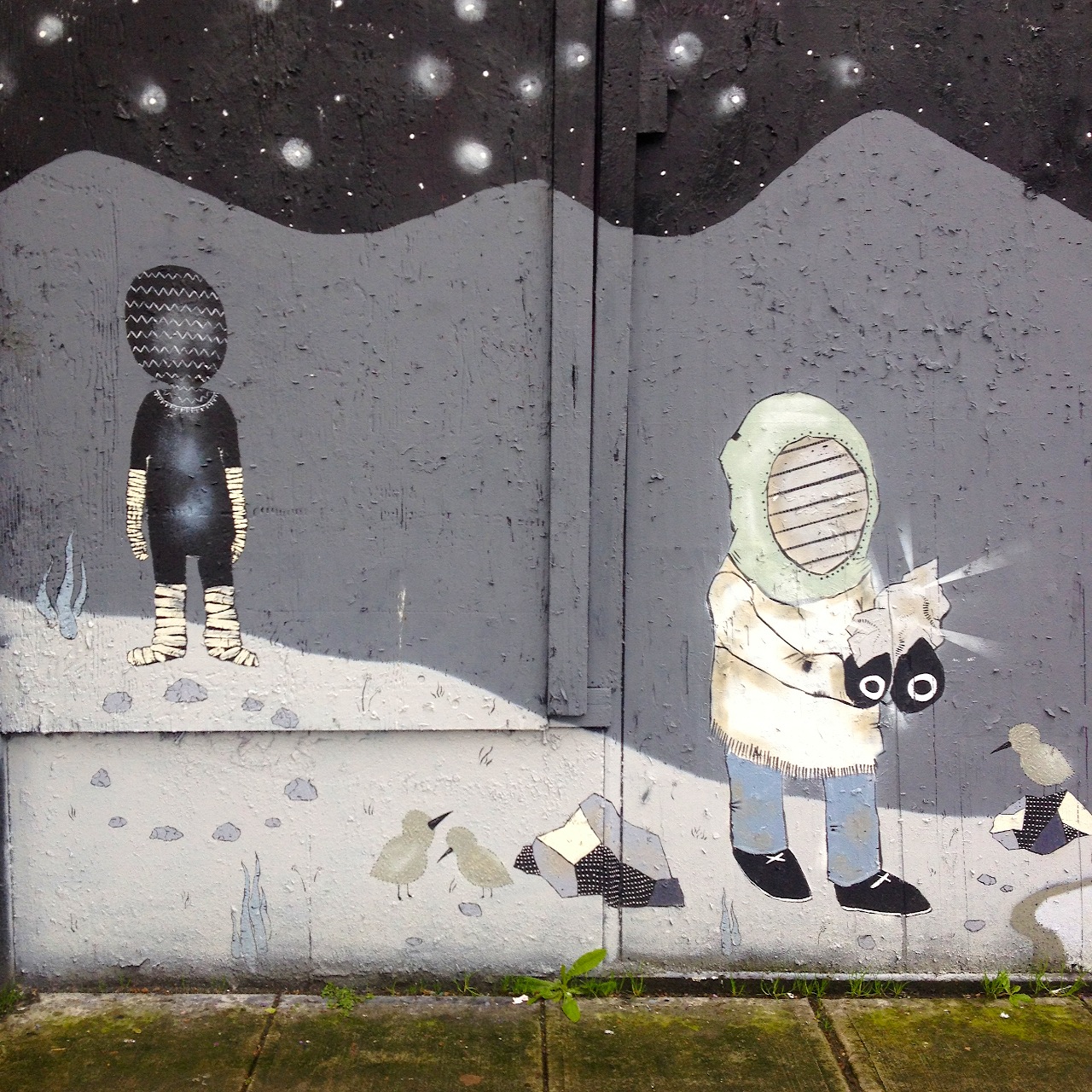 Hi Knox,
Cool pictures. Funny, we saw a few of those, too, but no as many. Can’t help with most of them (very curious about that Jesus one!), but here’s a little.
#2: “Last Friday each month, 1:30 p.m., Rabin Square, Critical Mass (bike organization, as you well know)
#11: about green-belting the cities, indicates the responsible organization
#14: says “the cat and the dog”
#32: sign is unrelated, advertising “various apartments” for rent in the Yemenite Quarter
And #1 (pic of Herzl, founder of modern Zionism): says “we don’t want, we don’t need” (maybe by religious anti-Zionists)
Rich

Thanks for the translations on some of this:

I figured that bike one was about critical mass, thanks for confirming. The Herzel one is everywhere: I wonder what the heck it means…”We don’t want, we don’t need”??? Hmmmm…

The very colorful poster with Jesus, I am thinking is for a heavy metal band. It was on a wall with many other posters for obvious heavy metal bands (my favorite name was Rotting Christ), but I can’t be sure. It stuck out though in its color and wow, what a drawing… normally, I don’t take pictures of band posters, but this potential one was too good to pass up, especially as I could frame it nicely.

The one i am most curious about is the comic strip “What’s Wrong With Me” on the telephone box, made stranger by the fact that it was in a every rich northern suburb among consulate houses near the beach in Herzilya Pitu’ah. What is that about?

[…] out our travels. In a country almost devoid of street art, these signs become a stand-in for street abstracts I like so much to shoot. #gallery-1 { margin: auto; } #gallery-1 .gallery-item { float: left; […]