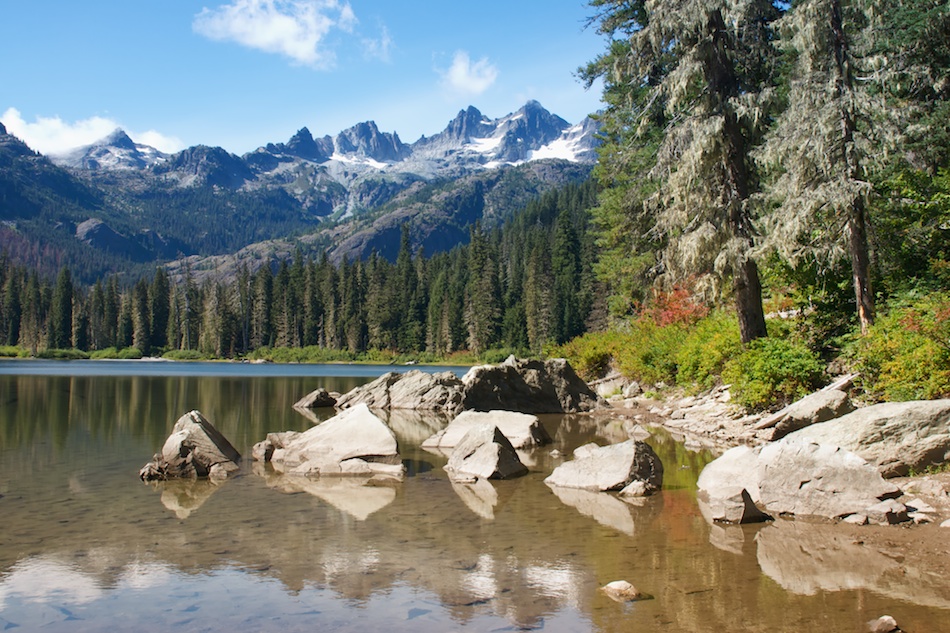 View from the eastern shore of Pete Lake

Salmon La Sac sits 17 miles outside of Roslyn in a narrowing valley on the southern edge of the Alpine Wilderness. A sprawling Forest Service car camp and a short drive from Seattle, it’s the kind of place I’d avoid in the summer.

Summer in the Northwest can be woefully short. With the work, out-of-town trips, and cool weather, this year’s felt shorter than ever. Labor Day came and went and we hadn’t even spent one night this year in our tent! How did that happen?

Surprisingly empty and its last week open, we based out of Salmon La Sac to do some hiking. Uncharacteristically, I didn’t do a bit of research on the trails before going and so we woke on Saturday to find that most of the trails were more ideal for starting a multi-day backpacking trek, leaving us few options. We decided we’d head to Pete Lake.

The second easiest hike, a walk really, that I’ve ever had to a quintessential Alpine Wilderness Lake. (The first being the jaunt to Talapus Lake). It’s still 8 miles round trip, so we were out in the woods for about 5 hours, but there’s not much elevation gain and the trail at times is as wide a sidewalk. I’d imagine it can be incredibly busy in the summer.

At the trailhead, we met a group of folks gearing up with their backpacks. Fit, strong, and with climbing ropes, I asked where they were heading, assuming they were off for at least a few days. “Oh, we’re just heading to Pete Lake, it’s her first time backpacking!”, one of the good-looking fellows replied.

They arrived and started setting up camp just as we were finishing our lunch. I was filled with envy thinking about their night on the lake, while Vic and I were down in the car camp. Yes, Pete Lake would make an great first backpacking trip and seems like it could be a swell choice for an early or late season overnight.

If you want to head out for some car camping and don’t mind carrying your gear a few extra yards and outhouses, it’s worth knowing about Cooper Lake. I also once spent a lovely afternoon on inflatable kayaks on the small, pretty Tucquala Lake. It’s up the gravel road heading north from Salmon La Sac and there’s plenty of Forest Service camping along the way.