Opinions on Bicycling in Israel 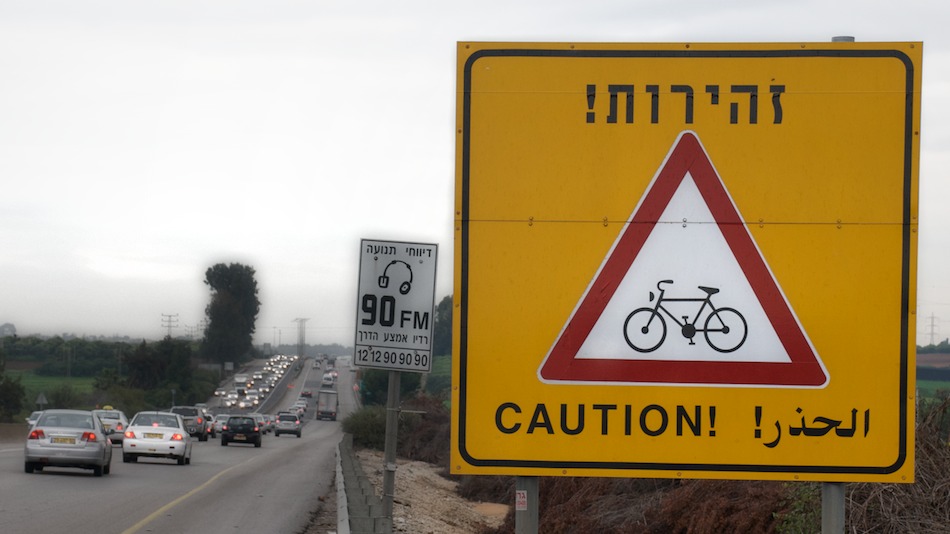 Well, that was a lot harder than I anticipated. Israel is a small country, with plenty to see and, so it seems, on a map enough roads that it ought to be easy enough to string together some decent riding.

Co-Motion at Rest in Hotel

Tel Aviv bike stores are generally found in two places. First is along the length of Hayarkon Street which is close to beach and tourist hotels. These shops specialize in big wheeled rentals. More compactly and for higher quality bikes and parts, there are many shops on Hahashmona’im between Carlebache and Menachem Begin.

Of all the bicycle shops I was in, I found the fellows at the Trek store the most helpful, though to be honest, like the others, they seemed a bit baffled about my plans and ideas for longer distance biking in Israel.

Tel Aviv has a bicycle trail system (bike lanes as part of the sidewalks), that in time may be very comprehensive. For now, it does not readily connect, there is limited signage and it’s not in the culture to truly keep bikes, pedestrians and cars separated like for example Amsterdam. Truly, everyone walks and rides where they want on the sidewalks. It has a proper name, but I can’t recall it and I never found a map for it.

When asked where I could go riding almost everyone cheerily talks about the beach promenade, with a few recommending the park north of the city. Throw in a light ride along the Boulevards like Rothchild or Nordau to stop for coffee and people watching like the locals and you could have a very nice day riding in Tel Aviv on a rental bike, for a total of about ten miles. Yes, the cars are aggressive, but no more so than Boston.

In many ways, the new suburbs have better “trails” for bikes, again, incorporating bike lanes into the sidewalks. However, in my limited experience of trying to get through them, I can’t make a special recommendation for biking to/through any of them. Big malls, housing blocks, biking on the sidewalk. Lots of intersections.

Next time I pack, I need to be more thoughtful and deliberate. For this trip I threw a bunch of stuff together and then forgot some essential things like my skewers, (off-size: tandem!) that cost me time trying to find them in Tel Aviv.

Ok, finding tandem skewers is going to be hard no matter where you are…thankfully, this is a big city.

What about tubes? I didn’t pack any extra nor did I remember my patch kit. Patches were easy, tubes not so much so. I am currently riding 700 x 28’s with Presta valves, which is a pretty common size for touring and cyclocross bikes. Here in Israel, mountain bikes are king so it’s all about 26 inch tubes and schraders. It took leaving the beach bike shops and heading into town to the shops, and even there I was on my fourth shop before I found tubes.

And how does it feel to be wearing Rapha in the market in Ramla? Like an idiot. I like riding in padded lycra. I like my girth-girdling Rapha wool jersey, but these do not endear you to the marketplace. I really need to work on a touring kit that is sensible looking and understated. I did try platform pedal biking so I’d not have to pack yet another pair of shoes. I can’t say that I’m converted and wonder if the trip to Jerusalem would have been easier with cycling shoes and clips.

Moving Your Bike Around: Day-Tripping
I put my bike on the very frequent buses to Tel Aviv and am sure I could have used it out-bound as well, though it is up to the driver’s discretion to allow it based on the number of other packages under the bus.

An interesting issue is getting your bike into the terminals past the security gates, and in particular unloading in Tel Aviv. It seems that bikes are not allowed in the terminal, but all buses unload on the 6th or 5th floor with no obvious way out of the terminal except to go through security. The technique involved to getting into the terminal with my bike was acting surprised (I was), stupid (that’s easy), and of course, being clueless and only speaking English. I think, ideally, one is supposed to get off at the stop before the terminal, however, this would involve know when you were near your stop, being able to get the driver to open the underneath of the bus and being quick.

While I have read bikes are going to be allowed on trains, so far, this has not be adopted.

Bikes are also allowed on some city buses, with an extra fee being charged for the bike. You just wheel your bike in and stand where the wheel chairs would be in the center of the bus.

Flash Floods in the Negev

I did not tour in Israel. At most, I only extracted a two-day solo adventure from my husband. And then it started raining, which included flash flood and closed schools on where I wanted to go.

Tour-like riding I tried to accomplish several times, despite people saying it would be impossible. Touring here though would be difficult. Not impossible, but difficult.

First, the weather and daylight conspire against you. With the summer being mind-numbingly hot, the best temperatures are now, but the days are also the shortest.

Escaping Tel Aviv is difficult, taking about 2 hours for both rides where I already “figured out” the direction.

Biking on the main highways is forbidden. The harsh reality is despite all the villages, the roads just don’t connect easily for bicyclists, often leading to a highway, at least on the eastern side of the country.

There is a National trail system and quite a bit of opportunities for mountain or off-road biking. With the right set up, I would imagine this would be a great way to see Israel, though to be clear: I don’t think you can bike on all portions of the National Trail.

Detailed maps are available for these off-road areas at sporting stores, such as Maslul. They are expensive (around $25 dollars a map) and too detailed for a road biker to justify.

I could not find any references in English to specific recommended routes and asking at all the bike stores was a hilarious exercise in both kindness and futility. Road biking is just not a large part of the bicycle culture here. The best I got was that bicyclists in Tel Aviv tend to favor the rolling country side near Lod. There they make a triangle (44/3/424), with a popular parking place at the gas station at the interchange called Tzamet Nashon. The best time for cycling is Saturday morning.

Another popular route is along the Highway 4 to Hadera. I did this, but can’t say I’d recommend it for recreation. Evidently, the earlier in the morning, the better. I did it right in the middle of the afternoon in a driving rain. Again, lots of interruptions due to traffic exchanges, and one can not take the simplest intersection for granted with Israeli drivers.

Into Jerusalem, as written about earlier, was brutal. Again, I don’t think bikes are allowed on the 1, nor would you want to be on it anyhow with the lack of shoulder on the final push uphill. This leaves the 395 through Ein Kerem. This is so hard; it’s often lacking shoulders with plenty of traffic as you get into the last 10 miles of big climbs and long descents.

There are some travel companies leading bicycle tours. As difficult as it has been for example to just get out of the city and feel safe, it might not be a bad option for people short on time but with a desire to see a lot of the country.

Finally, I’m mention one fallacy: that all Israelis speak English and that the road signs include English. This is not true. I can’t read a word of Hebrew. I’m still struggling to recognize “Tel Aviv”, turn menus upside down and in general find it hopeless. While you can expect major intersections to have some English on the freeway, that’s about all you should expect.

Overall
Of course, there is some irony in that just as I am getting the hang of biking in Israel, I must put the bike away.

I am curious about both biking in the North and heading south into the Negev. From there, the borders present their own challenges to Americans and those on bicycles.

Certainly, it would be helpful is Israel developed a color-coded bicycling map, like the one for Washington State, that shows recommended roads with shoulders and traffic volumes. Even something so simple, could make planning easier and more straight-forward. It is my understanding that there are plans for a national bicycle trail like the walking trail that spans the country.

I can’t say that Israel will be high on my list of places to return to for bicycling, though I have very much enjoyed our time in Tel Aviv and would certainly want to rent a bicycle for a day of riding around if we were here again, but that would likely be enough.