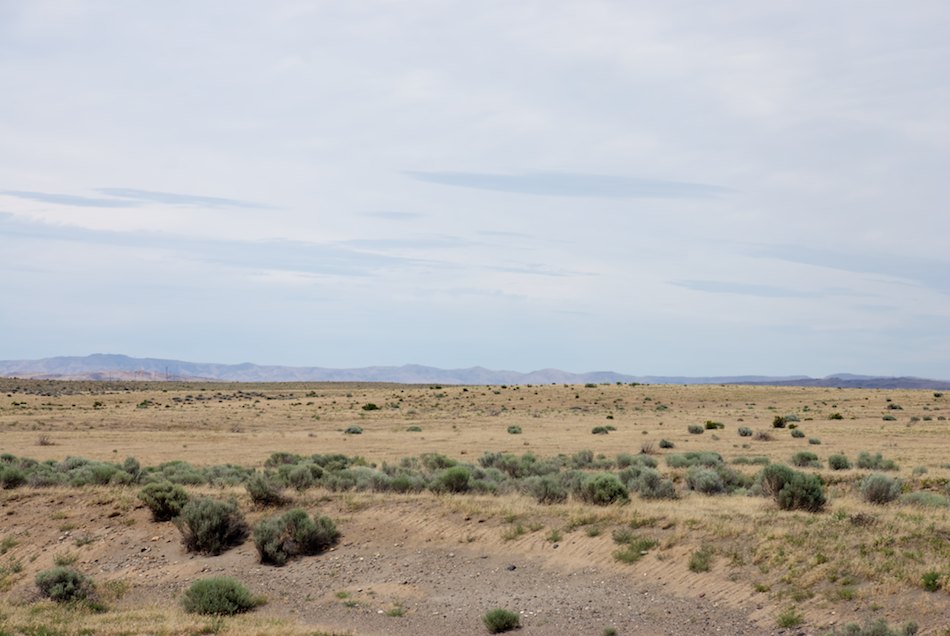 There’s not much along State Route 240 to make one pause: a long strip of highway, a few unmarked turns, and sage brush. For miles, there’s a barbed wire fence and on the other side, Hanford.

The United States Department of Energy’s Hanford Site was an integral part of the Manhattan Project and developed bomb-grade plutonium through the 1980’s. It is the nation’s most contaminated spot and largest Superfund site. In a lucky fluke, I was able to snag two cancellation spots to the hard-to-get-in tours. While I was elated, everyone else I chatted with was worried I’d come home with tumors and multiple heads. In Washington State, Hanford and the clean-up, the cost, and toxicity are a regular news item. I came home with only one head, but it turns out there was plenty I had no idea about.

When it comes to Hanford, there’s really no way to comprehend the scale of what is going on out there.

Dave and I were on the general Hanford tour: 5 hours on a bus, 7:30 a.m start, US citizens only. It included not only the B Reactor, but stops at many of the cleanup operations as well as some pretty interesting drive-bys. No cameras, no cell phones.

Here’s a few things we saw:

The B Reactor is the first place in the world where an industrial-size nuclear reaction occurred and is where the plutonium was created for the Trinity and Nagasaki bombs. A national historic site, the core building has been preserved and filled with many interpretive displays and videos. With almost as many “guides” as tour participants, and geiger counter on the walls, I found rather amazing that we were allowed to “explore” the building at the end of the tour. There’s no way to adequately explain the strange power of turning a corner from a narrow hallway to standing in front of the enormous multi-story dark cube of graphite coursed with tubes that is the heart of the B Reactor.

The Environmental Restoration Disposal Facility (ERDF), basically a giant dump. But here’s the deal with this giant dump: entire buildings go into it and everything’s been put in plastic bags. Imagine your house crushed and put into a plastic bag. Now imagine a large machine rolling it flat to make sure there’s no air pockets and then sealing small sections in concrete to ensure that there is no way that water can leach into it. And imagine next that if that machine breaks, it too just goes in this dump to be compressed…and every machine that has any contact at all with even the dust of the hundreds of buildings surrounding the many reactors at Hanford will also go into a this dump. No one knows when they’ll be finished digging new “cells” for the dump (at a cost of $25,000,000), but the guess is the dump will be completed in 2030.

We passed a 25 billion dollar factory that’s going to turn radioactive sludge into radioactive glass logs. It’s only halfway done and will take another ten years to complete. We certainly didn’t stop there, but got a “turn to your left!” to see it. Waste from tanks up to seven miles away will be piped into the factory and where they’ll actually bury the radioactive logs is anyone’s guess now that Yucca Mountain’s been decommissioned. My guess will be that it will be buried at Hanford. And out the right window, we saw giant sarcophagus that contain the spent fuel cells from the nuclear subs.

We saw people in suits with yellow radioactive chest decals cleaning something.

We drove by a hole in the ground that’s going to become the world’s most advanced water purification system, where for years and years, they’re planning on pumping all the water out of aquifer under Hanford (remember the site is bounded by the Columbia River) to remove the chemical and radioactive waste that’s been leaching from the site. How many years will they pump water? I can’t recall, but it is an astounding project with wells and pipes running throughout the site (which is approximately half the size of Rhode Island).

We stopped by a facility where they test robots and tools to clean out the old leaking tanks of radioactive sludge. Too dangerous to dig up, filled with odd poisons created by chemicals brewing for years and years, most tanks only have a twelve-inch opening to get the equipment in with the goal creating something that can be vacuumed out into a sturdier tank..and of course, anything that goes in the tank, stays in the tank.

When I think about Hanford, it’s the time frame and deadliness of the radioactive waste that’s most difficult to fathom. I keep thinking about our recent trip to Israel and the piles of rocks and the mysterious people who lived in these pre-Biblical cities and how that’s only a fraction of the time that these wastes will be extremely dangerous and along the major river of our entire region. Even the thought that the dump for the non-radioactive buildings in plastic bags may not even be finished in my life time is staggering, let alone thinking that ten thousand years from now when our species could be gone, that an earthquake, volcano, or ice-age flood could potentially release the poisons from a site long forgotten and perhaps not even understood.

I’d recommend this tour to anyone. I would have liked to have more historical information at the start of the tour on Hanford’s roles in the Mannhattan Project as well as some more easy-to-understand science. For anyone interested in how public tax dollars are spent, particularly, Washington State citizens, I think the tour is really essential to help conceptualize the scale of the project and the necessity of the environmental cleanup.

With no camera, there’s not much to show, but I’d point you to the Washington Nuclear Museum and Educational Center (WANMEC), on online museum by the Washington Physicians for Social Responsibility to learn more about Hanford as well as some great archive photos of the site.