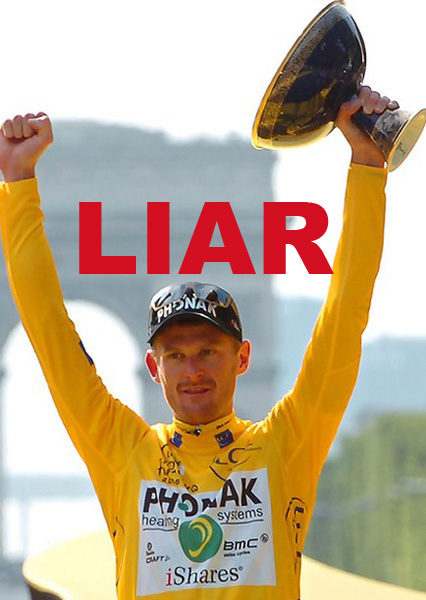 Floyd Landis is a liar.

Floyd Landis is a Liar

After years of proclaiming his innocence and being stripped of his 2006 Tour de France victory, the last couple days have been a swirl of news about him writing different members of the cycling community, prosecutors, and news organizations detailing his extensive doping and implicating others.

At my best, I’d like to be empathetic as I’ll never understand the drive it takes to be among the world’s most elite athletes nor the pressure to remain there. I can also understand why he’d want to clear his conscience. However, let’s be real. How much can you trust a guy that goes on book tour with Positively False: The Real Story of How I Won the Tour de France, takes donations from fans to mount a legal defense that cost upward of two million dollars, and is implicated in hacking into the French drug lab and blackmailing Greg Lemond (who himself doesn’t appear to be the most emotionally stable cycling personality). In a blog post from several years ago, I described this entire episode as unseemly. It, and he, remain so.

A fan of the sport, more than a particular rider (expect that hot coke-fiend Tom Boonen!), I’m content not to write more about Landis. It must be a terrible thing indeed to spend the rest of your life known to all as man without integrity.

I don’t often talk about my work on my blog, but this morning was spent thinking a little too much about how a particular mix of poorly thought-out strategy, a website likely built for small client who likely has no idea how to maintain or change it themselves, and a flash of unpleasant PR can go horribly wrong.

OUCH Medical Center is doctor’s office outside of San Diego. Specializing in sports medicine, it’s both a rich man’s pleasure, and not an unnatural fit, for it to sponsor a cycling team.

I’d never heard of OUCH and the last thing I’d thought I’d be looking at today was an awkward, poorly designed site for medical office in a town 2,000 miles away. When I googled “Floyd Landis” to catch up on the news, FloydLandis.com opens a section of their business site and is about their star cyclist. I assumed I’d be visiting a personal brand site of Landis.

Leading with “Floyd Landis: An American Hero“, it follows with the story of his defamation by the lab, his many great victories, his triumphs with a hip replacement (there’s the tie in, right?). If it was a bit over-stated three day ago, it’s now just embarrassing rubbish. That content, which I’d have argued isn’t germane to their business anyhow, needed pulled with an hour of this story hitting the Wall Street Journal. That is was up for almost two days after this story broke is ridiculous.

One could assume they discussed the value of Floyd Landis’ sponsorship, but did they really understand what taking over anyone’s personal.com and rolling it into a sub-domain and navigation structure of their business site could mean?

Which leads me to social media: it’s harder to control. If you’re not going to be actively managing it, you’d shouldn’t be messing with it. What does a small medical office need to tweet? Is it useful to anyone to be fan of your doctor’s office?

FloydLandis.com/OUCH the Bicycle Team/OUCH the Medical Center have been completely blurred. It’s bad enough that the actual information needs of current and prospective patients is neither segmented nor presented well, but to have it be further confused by the mixing in of fan management for a side project is incredibly short-sighted.

How many people have visited for all the reasons you wouldn’t want in the last 48 hours?

I always wonder when a client asks to get involved in social networking, who’s actually responsible for maintaining and refreshing this content? How much time and money is that really going to cost? How much transparency do they actually want and what is the plan if something going askew?

OUCH the business is tweeting, “@ridertbt again, this is the medical center account, not the team. We have to watch the news just like everyone else 3:23 PM May 20th”. Their company Facebook page and blog are gathering nasty comments, and why not? I got to these pages through FloydLandis.com so it is certainly fair game.

There’s lot of reasons being involved with Landis may have been exactly the right thing to do for this company and for the people who run it, but I’m sure no one at that doctor’s office ever expected to be a part of the national news cycle. But now they’re news, all the flaws of their web “strategy” are obvious and their lack of really understanding the medium apparent.

[note: While writing this post, the FloydLandis.com redirect was moved to stand separate from the business site and is no longer is a navigation option: still complete rubbish, but at least not directly tied to the business….But you can still buy Landis-signed $1000 OUCH jersey there if you’d like!]