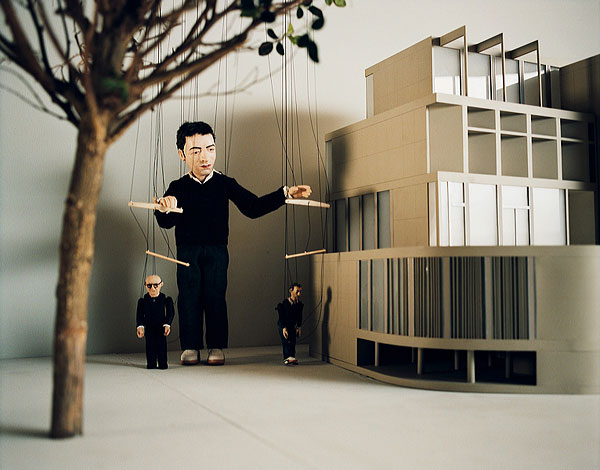 Pierre Huyghe as the Puppet Master

On paper, the Frye doesn’t have much going for it. Saddled with a dreadful permanent of collection of late 19th-Century German art and the benefactor’s requirement that it be free, it’s off the gallery scene up on First Hill and small. With its core mission of presenting “representational” art, it’s hardly on the circuit of folks off to see summer blockbuster shows of Impressionists, but to the credit of the curators and board at the Frye, they consistently present shows that I remember, think about, and which spark my own creativity and research.

Everyone knows puppets (and animations) can say and do things that people can not. The current primary exhibit, The Puppet Show, explores the use of puppets in contemporary art.

As a group show, there’s plenty of failure and that’s to be expected. I think that one of the basics of modern art (and its criticism) is that it tends to oversay everything and puppets with their askew conversation are much too easy for lesser artists to overstate what is already obvious.

However, in better hands the use of puppets engages in surprising and delightful ways, usually with a backward glance toward childhood, as the viewer is asked consider the frustrations our adult life and horror of our times. I thought the best pieces worked within very traditional models and with traditional puppetry. Perhaps the limitations of the form focused the artists on the theater of art and the presentation, rather then on the superficiality of style.

It’s no surprise that the Frye chose Pierre Huyghe’s puppet opera as one of the lead visuals of the exhibit. What’s not to like about marionettes of Le Corbusier and Harvard academics? And puppets of French artists? Swoon. It’s a lovely work without the meta-history, and with it, cheeky and depressing.

My favorite piece stretches the definition of the show and I’m still not quite sure why it was included as I can’t recall even sketches of puppets within it. William Kentridge’s What Will Come (has already come) is stunning to look at it as it spins out an animated fable and horrific history in the thick charcoal drawings he is known for. I could not get my head around how this effect works, and so for me, it was a bit of magic and wonder.

It’s the most video heavy show I’ve seen at the Frye, with clever video booths showing alternating films on different days. They claim there’s over seven hours of video to watch. I’ll be honest for all the serious “art” being shown, one of my favorite moments was found tucked in the back corner where an older educational video from the Carnegie Museum is playing. In it, Grover from Sesame Street demonstrates that puppets are particular good an explaining “Near” and “Far.” Sure, it’s a gag that whisked me back to being five, but I was quite ok with that and laughed out loud.

This show is up until September 13. I’m planning to go again to spend more time watching the videos and to look at the Kentridge piece. I’d make the recommendation to the folks in Seattle, that they find some time to do the same.