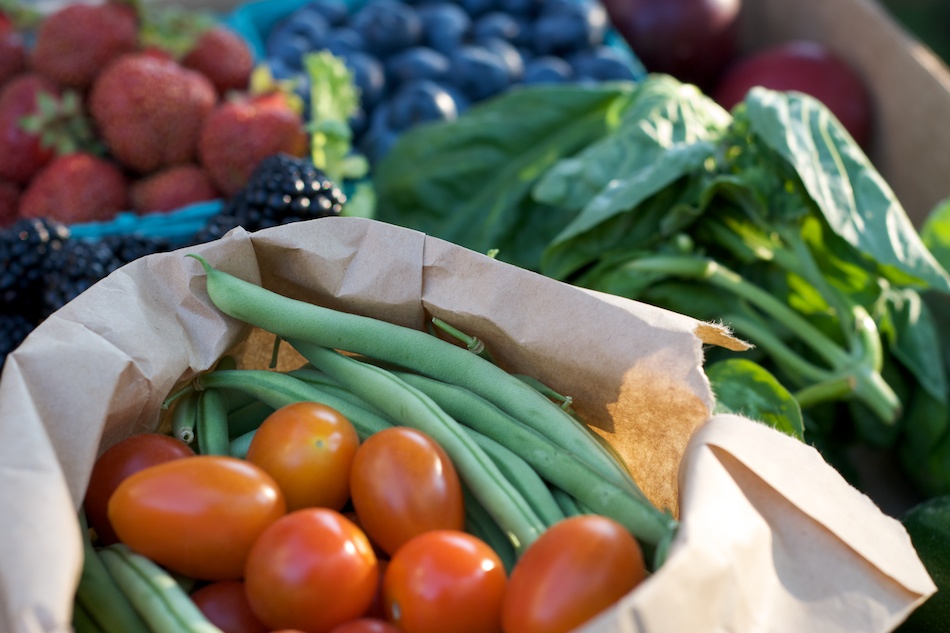 Over the last several weeks, I’ve been in the kitchen more than normal. I’m digging through the pantry, looking at labels and thinking not about meals (which I need to), but where our food is actually coming from.

I like food, which both my friends and my girth would attest to. Certainly, buying fresh food and organic when possible is near the top of my list and something I do, but often without enough questions. Nor am I consistent in my approach to meat.

Last week I finished Barbara Kingsolver’s Animal, Vegetable, Miracle in which she details her family’s attempt to eat locally for a year. Laid out as any good garden book is by month, it’s not only a good read, but a handy book of inspiration and tips on what it might take to succeed. How many cans of pasta sauce do you really need to put by to get through winter?

Last week, in addition to our CSA (Community Supported Agriculture) box, we also had olive oil from Italy, coffee from who knows where, dried ginger from Thailand, pre-packaged instant organic grains from Australia, apples from New Zealand, and wine from Argentina and France. Those are the countries I remember or could find on the labels. While I’ve thought about packaging and done almost nothing about it, I’ve never really stopped to think about the actual physical cost for these goods to get to me for my pleasure and delight. More importantly, I’ve not considered hard enough that if I shifted my buying power to local farmers, I’m helping them stay on the land, keeping the land agricultural, and sustaining the diversity that I want my own society to have, all the while shifting money from the large corporate interests who maintain monoculture (both in plants, palates, and people). Do I really need to buy flour from Italy when I live near of the biggest wheat producing areas in the world?

I’ve been thinking hard about what it might mean for Vic and I to shift our diet to actually eating locally and Vic’s been more interested in eating “whole” after reading Michael Pollan’s In Defense of Food which he sums up as“If you don’t know what the ingredients are you shouldn’t eat it.” In this, we are luckier than most as Seattle not only has a favorable climate (we were eating homegrown arugula in January), but also a thriving artisan food community and the growers which support that. Most importantly, it’s something our friends are engaged with and sympathetic too. I can’t imagine how hard my parents would find doing this in the exurbs of Dallas in their retirement community. Do they even have the word “locavore” in Texan?

In Ms. Kingsolver’s account, the family sat down before starting their year and each listed an item they “could not live without”. Coffee, for example. I’ve been doing the same mentally, and I suppose at some point should make a written list to chat about with Victor. Perhaps we’re not going to get too strict, but just more thoughtful: we’ll still get some grapefruit, but maybe a bit less, only in the winter when it’s naturally in season and from California instead of Florida. Or maybe we’ll just stop eating grapefruit at home. I’m not sure.

I’ve been looking at our kitchen in a new way this week. I feel like we may be starting an adventure.

I love the concept of eating local and eating whole. I have a gap in what I think and what I do though (still overwhelmlingly lazy in my food purchases). And my dear DH just can’t do without meat, though I am pretty indifferent to it and tend not to eat much whenever I make it.

NPR “Talk of the Nation” had a segment critiquing the idea of eating locally (http://www.npr.org/templates/story/story.php?storyId=112105594). Eating foods from other states and countries may not be as bad as you think. It’s a complicated to calculate how much the food costs coming to your table.

Of course, I was listening to this in my car on my way to the local farmers market….

Knox, I’m Bridget’s nanny and D sent me a link to your website b/c I am on a local food craze these days. Anyway, I loved the Kingsolver book you mentioned. That book opened the door to other books and movies making a huge impact on how I live these days.

D told me that you are also into canning. I was hoping for some recipes from you (who I hear to be a fabulous cook) as a friend and I are going to do some canning on Friday. Any tips would be appreciated, too!

p.s. I’m thinking about chickens for next Spring, too! 🙂