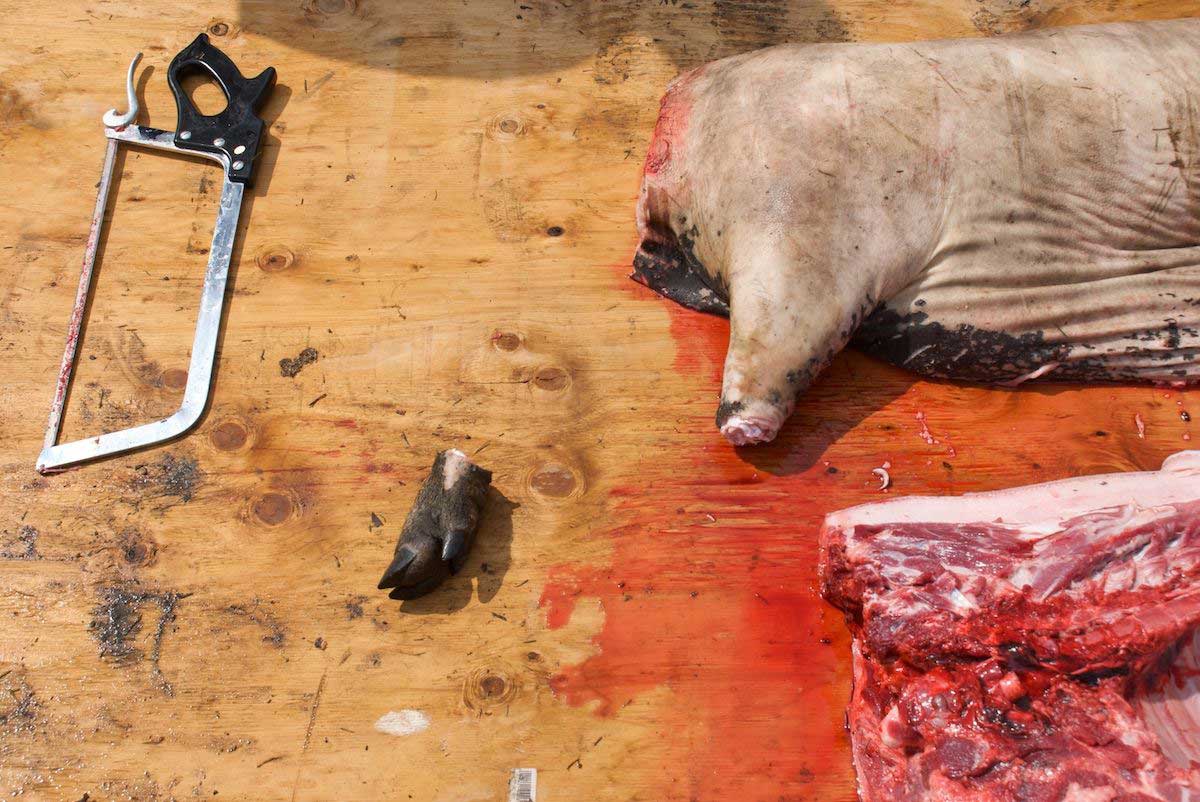 I never expected that butchering a pig would be a pleasant affair. It’s not.

I wanted to understand how much work it would take to process a pig in the event I bought one. As a bit of a foodie, I’m curious to make my own sausage and try cooking some bits of the pig that are harder to get or more questionable. Finally, it should come as no surprise that I’m concerned about the long-term sustainability and health of our industrialized food supplies. The more I know, the more I think this food is not safe to eat.

So last Saturday, I was back at Bruce King’s farm, waiting for class to start, letting others make nervous jokes while I snapped some pictures.

I’ve slaughtered plenty of rabbits and a turkey. I’ve raised sheep, goats, and pigs that were loaded on trucks (or dropped off) and returned in small freezer wrapped packages, but I’ve never been at a large animal butchering.

Here’s my top-level take away from pig butchering: it never feels like food.

It’s always meat: large meat in ways that make most people uncomfortable and nervous. When we were finished, there were still hardly any parts as something I’d recognize in my kitchen.

I also believe there’s an affinity humans share with pigs. It’s a reason Orwell made them the rulers of the farm, why Charlotte’s Web and Babe are tender tales of redemption. We recognize their smarts and personalities in a way that makes killing them uncomfortable. However, there’s hardly anything I eat that makes me as happy as bacon, ham, or pork belly. The word, according to Bruce and Heath, is that I’ve never had real bacon.

This post is going to be long, but given the uncertainty of the new economy, it might come in handy if we all end up turning our lawns into more useful pigsties. Despite how gruesome it might seem, realize this was done by hand by people who care for the pig’s welfare while alive and killing it as humanely as possible, as opposed to mass mechanical slaughterhouses processing hundred of hogs a day who live in cramped feedlots.

You can read about Ebey Farm’s turkey butchering class here.

If you live in Western Washington and are interested in either attending one of these classes or finding out how to buy a pasture-raised pig, you can contact Bruce by emailing him, here.

It is politically correct to say your afraid of a gun