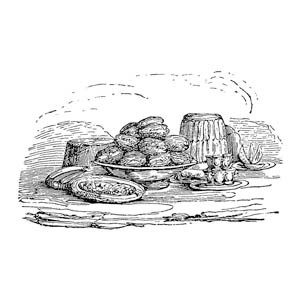 Last week, I was casually browsing an old hippie classic Back to Basics: How to Learn and Enjoy Traditional Skills looking for information on butchering turkeys, given the unlikely scenario that I’m part of a Turkey Co-op right here in central Seattle.

When I was fifteen this book and the Foxfire guide provided my sense of what adult life would be and provided a powerful escapism, that took me to Forestry School out West, before I fell into the more destructive and sexual world of Henry Miller, Foucault, ActUp! and black turtle necks.
While I never found specific answers to my turkey butchering questions or some winter gardening that I want to do, a recipe for Hartford Election Cake caught my fancy.

“This spicy cake, studded with fruit, was served in March at town meetings that often lasted all day. The recipe was first published in 1800 in Hartford , Connecticut, in the second edition of Ameila Simmons’ American Cookery. Later the cake became known as Hartford Election Cake and was eaten while waiting for returns or to celebrate a victory. It was one of the first foods to be associated with American politics.”

Besides the Freedom Fry and the Iowa barbeque, I’d never given much thought to traditional political cookery. So with an eye towards an election night party and a celebration for the victories of my candidates (Oh! How Long We’ve Waited!), I thought I’d try my hand at this most traditional of cakes.

While I started the cake based on the recipe in Back to Basics, while shopping, it occurred to me that being published in the 70’s their version with only raisins would have traditionally included other dried fruits, such as prunes or figs.

When I got home, I turned to Google to find that the outline of my book was correct, but that the cake, not surprisingly, has a deeper history and several more complex variations, though no entry in Wikipedia.

While not the best article on the cake, Linda Stradley of www.whatscookingamerica.net has the richest collection of quotes on the subject. She says the cake, a classic English fruitcake, is “also known as oak cake… and training [or muster] cakes, because another name for Election Day was Training Day. These cakes were baked to celebrate elections “as least as early at 1771 in Connecticut” and would have likely been served with (hard) cider.

When I started my cake, I decided to throw a bit of caution to the wind and double the recipe, since I was unsure of how many people might be attending the party I normally go to. I figured I’d bake two cakes, and if they turned out exceptionally well, I might give one to the poll workers. I was delighted to find that my sense that the cake should be large is in line with Election Cakes of yesteryear, though by the standards of the day, my cake would be quite puny.

Stephen Schmidt’s research in the Culinary Historians of New York, points to the enormous size of the cakes, “The itemized record of Connecticut’s election Day expenditures for the year 1771 certainly point toward a cake in the bushel range. All told, the Connecticut colony spent a little over 23 on “sundries,” including “cake,” for it Election Day festivities in that year. The materials of “the great election cake” itself cost 3, and a certain Mrs. Ledlie was paid a littler over 2 for making it. In 1771, 5 was a hefty sum to pay for a cake!”

Linda Stradley actually collects Ms. Simmons published recipe, though dates it from 1796, not 1800, as follows:

Wet flour with milk to the consistence of bread over night, adding one quart yeast; the next morning work the butter and sugar together for half an hour, which will render the cake much lighter and whiter; when it has rise light work in every other ingredient except the plumbs, which work in when going into the oven.

Certainly, this was not a cake for the feint of heart to try in their hearth, or later, wood stove.
In a recent post for the New York Public Library, Gina Halkias links to several archival recipes, including Ms. Simmons.’ She writes, “It is not surprising, given this large quantity of ingredients, that colonial women slaved for days prior to election day baking upwards of a dozen “loaves” or cakes to accommodate guests visiting from other Connecticut towns for the celebration. The competitive spirit was in the air, as women vied to win for “top cake” among their neighbors and friends.”

Over the 19th-Century not only vast changes were taking place in society as the country industrialized, urbanized and staggered with new immigrants, but Election Day itself moved from a warm and festive May into the cold and bitter of January. And the event itself lost its holiday appeal with the rise of the new commercial holidays of Christmas and Easter. Finally, Linda Stradley posits that “We were no longer the only democracy, and such things as popular elections may not have seemed as uniquely American.”

My doubled Recipe for Election Cake, based on the Back to Basics book, was something like this:

Scald the milk. Add the 2 tbsp. sugar and let cool to lukewarm. Mix the yeast with the milk and let stand five minutes. Slowly add in 3 cups of the flour to form a surprisingly stiff dough. I thought it would be more spongelike at this point. Cover, and let rise until doubled, about 45 minutes.

Sift the remaining dry ingredients together with the fruit, and mix into the wet mix. Beat it gently to work the gluten, but do not over mix.

Pour the batter into two grease cake pans. I used both a tube pan and a regular cake pan, both turned out fine. Let rise for an hour or until it doubles and then bake at 350 degrees for 35 minutes.

When an toothpick comes out clean, remove from oven and cool completely before frosting. For frosting mix the powered sugar and lemon juice until smooth. Pour glaze over cooled cakes.
The recipe I was following says it is a cake that gets better the following day, which makes
sense given all the fruit in the yeast.

Based on the crumbs and a bit that needed trimmed for frosting, it seems like it will be a perfect cake for breakfast or with tea, but is not the type of cake typically consider for festive occasions.

Now into it’s second day, this cake has just gotten better and better. The spice is not so hard and the fruit, which I chopped very fine has kept the cake moist enought, despite it being of a very large yeasted crumb. It’s quite nice actually.

What a cool/wacky find! Too bad I didn’t find it pre-election day, and force it upon the patrons of my work…