A Microlook at The Washington State Caucus 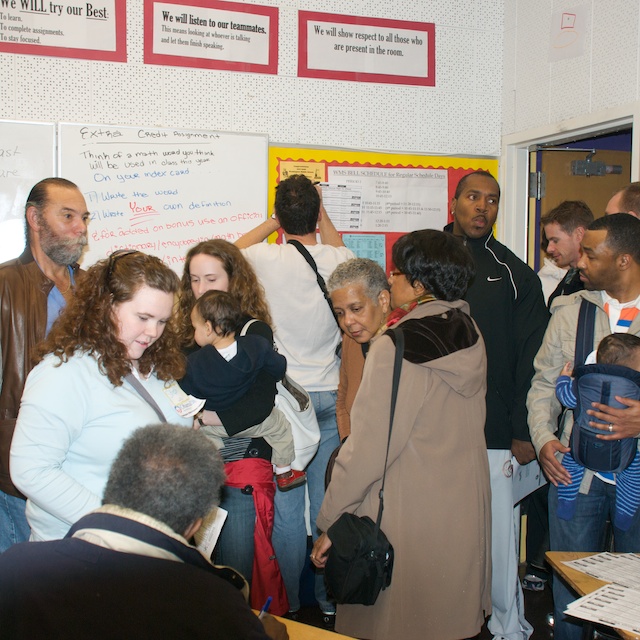 There are a lot of complaints that the caucus is inherently not democratic and limits participation. But I feel it would be hard to really make that case given the turn out and neighborhood participation on Saturday.

Our precinct, 37-1833, is about 10 square blocks. Nearly 200 people crammed into one classroom at Washington Middle School to vote overwhelmingly for Barak Obama. That catchphrase of “change” was palpable in the room. In our tattering neighborhood that shouldn’t be a surprise, buffetted by crime, poverty, and neglect on one side and squeezed by gentrification on the other. Our neighborhood clearly shows the rapid changes Seattle’s affluence is causing as well as who exactly is left out. There are no easy answers to this problem, but clearly, something is broken.

I did not like the caucus process this time as much as 2004. I thought the sign in to vote sheets were a poor way to gather email addresses for fundraising and did, in fact, limit the true power of the caucus where people actually STAND TOGETHER for their candidate. It did not give us a chance to see who was undecided for the vote-swaying portion of the afternoon, nor did it encourage folks to sit through the entire process. I also did not like that platform ideas were only passed up to the district level and not voted on right there in our precinct. I did like the passion this year and I liked how many people, both young and old, were coming to their first caucus and then really wanting to go to the next delegate meeting.

As we moved in our home in rainy November, during the time of year when everyone disappears inside in Seattle, it was great to finally see and talk with our neighbors. Since caucus, nearly every time I am up at the store, dry cleaners or bank, I see someone I now recognize, and recognize as a participant in our civic life together. That to me makes me feel like I live in a neighborhood that is worth caring about and fighting for.