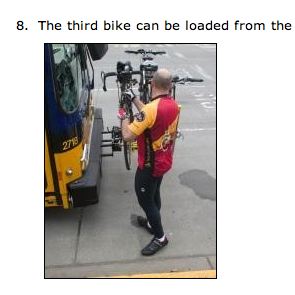 Occasionally, on recent trips to Redmond, I’ve used the 3 bike rack on the front of the Metro buses. With the high demand, even these are not enough at peak times. All buses crossing the bridge, regardless if they are on route or heading to base are required to stop for cyclists. I’ve even had a bus driver have me put my bike in the bus for the ride across.

The three bike racks make me nervous. I’d seen a post a while back about a city somewhere deciding not to go with them due to turn radius, but otherwise had never heard or seen a problem with them. I just can’t stomach to watch my bike bouncing around on them and every pothole makes my skin crawl with dread. So I often sit in further back in the bus so I can’t see my bike on them.

That said, I’d never heard or seen any reports off bikes actually coming off. You’d think with a bus going 50 miles an hour over the most congested highway in the state, that if a bike had come off, we’d hear about it.

Yesterday, Metro stopped using these racks. To keep the racks on the suburban routes (and these are much needed) they took the two-bike racks off the downtown locals. This makes sense as a temporary fix since during the day you’re not allowed to have your bike in the free ride zone anyhow. As a long-term fix it’s no good as these are the most popular routes in the city and often, when it is wet and cold, I laze out and take my bike on these routes cross-town.

What I am wondering though, did anyone actually have their beloved steed fall off the bus?

On Kent Peterson’s bike blog, the comment from Metro implies bikes have been falling off, but doesn’t come out and say it (now that you mention it). It is indeed an interesting choice of wording, and makes me wonder what their motivation is.

On a personal note, Portland’s Tri-Met buses have recently invested in the 3-bike racks, and I’m more nervous than ever. I rarely bring my bike on the bus (barring bicycling catastrophe), but the whole thing makes me wonder…

The implication is that bikes have come off but I want to see pictures! I am curious is Metro liable? Do they give me money if my bike falls off? What about any passengers or other cars that may be impacted by the event?

I am thinking that if a bike came off, particularly on the popular crossing of the 520 bridge, where the racks are almost always full during the commute…WHAT A DISASTER! One of these bikes, flying off, under a bus, then into traffic on a narrow two-lane bumper to bumper bridge (or highway): it would likely be front page news.

Certainly, I can imagine it, but I just have not heard of it actually happening.

If, and I’m just saying if mind ya, bikes had fallen off, then there might be some pending legal issues and Metro & Sportworks would be in a “can’t comment” situation.

But if you go over to the Cascade message boards and read through them, you might, just might I’m saying, find some folks with direct experience.

Given that Metro yanked the triple racks this weekend and that’s a kind of big deal, I could certainly see where people might VERY LOGICALLY assume that bikes have fallen off bus racks but I myself have never seen it. I’ve never seen Tokyo either, but I think it exists.

Was that vague enough for you?

Ok, maybe I am just a disaster maven and really want to see the pictures. I can admit that. The thought! The horror!

One of the worst routes, I’ve ever had my bike on is the potholed right lane of I-5 to Everett. I had to go sit in the back of the bus as I really thought I was going to have an anxiety attack watching my bike on the bouncing rack with every single pothole.

Now, while you ride everywhere and perhaps don’t have to worry about this, I have certainly had problems and concerns with the racks when my bike is all tricked out with the normal set of racks, fenders and lights. It makes the bike feel less than secure on the bus.

I do love the Metro bike service though and use it frequently when I am feeling particularly laggard.