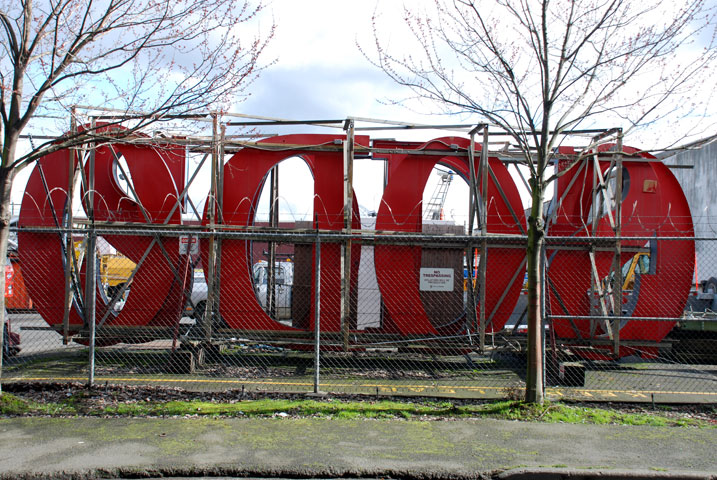 And there they are, the SoDo signs!

When I first moved to Seattle, the largest building in the area South Of DOwntown was what I guessed was called the SoDo Building. At the top, large red letters stated the obvious, SODO!

I temped there once. Surprised to see the place with the dingy Sears facing the street was actually an immense warehouse and part of the Port of Seattle, I think I spent a day or two unloading rolls of carpet.

Today, I was actually riding my bike to get things done- something I’ve not done in a while. This involved a trip across Harbor Island and a stop at Home Depot for paint. Not terribly familiar on a street by street basis with this part of town, I crossed under the viaduct near Spokane street to look for a short cut to First. It’s mainly potholes, dirty trucks, and rail lines down here.

Then these big red letters caught my eye.

I’d assumed that these had been sold off as objects to sit in someone’s loft long ago. Even in a jumble, it was a pleasant surprise to see them again.

heh cool sign. wouldn’t it be cool to see it up? maybe someday they will brand the SoDo
-davem