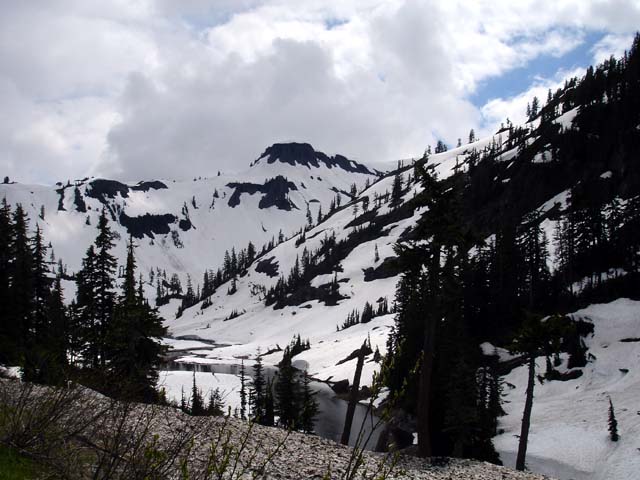 With a trip each direction for us, and my newly rented house in the center of Seattle, I’m now officially long-distance dating. My phone bill doesn’t reflect this, though the recent collapse of my computer put a damper on things.

As I see it, my first priority is to save money for next year’s longer bike trip. My second is to pry Victor from Boston. Luckily, I don’t live in Atlanta or Houston, making the job a bit easier.

June in Seattle can be a glum affair. The days are long, but the teaser of May usually gives way to a few more weeks of clouds and drizzle. I warned Vic, “Bring a raincoat, and we’ll hit Vancouver which ever weekend the forecast looks best.”

After a week of trying to learn how to balance work, unpacking my small space, and showing Vic a few places to eat after work, we took five days to do a bit of sight seeing. We were hoping to get in a short backpacking trip, but the snow is still deep and low this time of year.

We followed the clouds up I-5 and made the decision to skip the hike in the rain for a night of car camping at the small Euro-lite resort town of Harrison Hot Springs. Sitting at the southern end of long think lake and steep glacial valley, the sulfur springs in the public pool were hot, affordable, and I felt cooked after only an hour and half.

The following day with its low low clouds kept us out of the high mountains. Instead, we turned toward Vancouver two days early, with a stop at Cultus Lake and its water slide park. I could easily make a vacation of going to waterslide parks on cold days when most people keep their kids at home. Of course, being near the end of the school year, we met plenty of kids, one particulary who was exited by the “Big Guy! He makes a Tidal Wave!”

Vancouver, BC is one of my favorite cities and a place I would live without hesitation. We stayed at the perfectly reasonable YMCA (which will be closing sometime soon for reconstruction), and ate at many fine restaurants, including the 5:00 must Bin 941, and Vij’s. In one of our odder stops, we went to a men’s only “product” store. That’s right, shaving cream, aftershave and bubblebath designed for men. Vic is a product queen and I am rediscovering shaving.

Deep with products and weather slowly getting better and better, we left on Saturday for one more night of car camping outside of Glacier, Washington. The forest service car camp, Douglas Fir was one of the nicest camps I’d every stayed in. Big spot, nearly empty, and right on the raging snowmelt torrent that is the North Fork Nooksack in June.

And then up, up, and up the switchbacks of Goat Mountain till we hit the snowfields, and the clouds swirling around make it hard to justify slogging up further in the softening snow. This is one of the better early hikes, as it’s a south-facing slope with amazing views of Mt. Shuksan. We ended the day with a bit more driving, up first to Heather Meadows where the road isn’t plowed out yet, and then right back down and out with the Cascades faintly showing themselves along I-5.

A few days ago, I got an email from Vic who’s now back in muggy Boston. He said, “I miss Seattle.” Though he’s evidently not sure if it was working in the wireless cafes, my outstanding light-filled apartment, or the sheer brillance of leaving for a few days of big mountains and great food.

My side of a bi-coastal affair 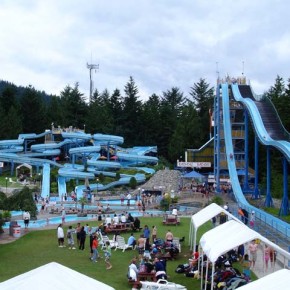 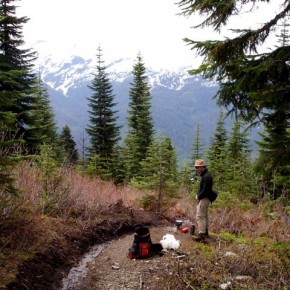 A Natural on Goat Mountain 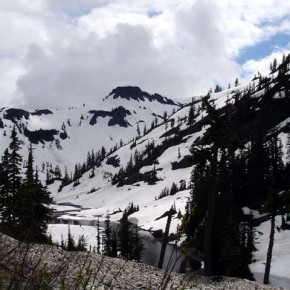 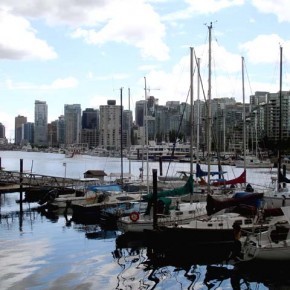 Rushing Waters of the Nooksack