Invasion of the German Wasps 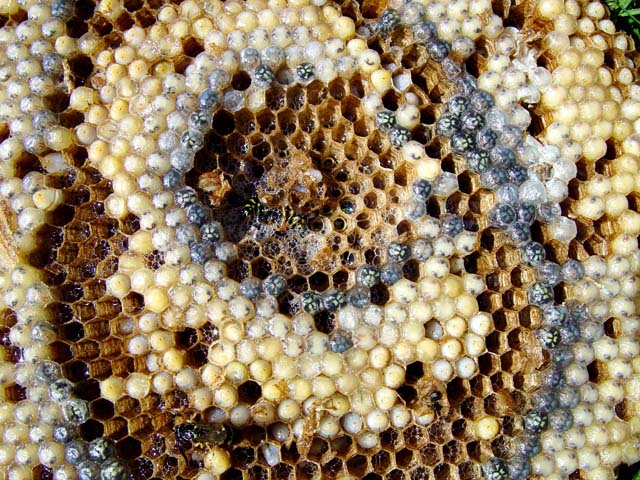 For three nights, above my head in my living room, there’s been a increasingly loud gnawing. My first thought was termites because it sounded like the wood above me was being systematically destroyed. Then, as it correlated to my assault on the rats, I thought it’s a rat nest.

I’ve not been sleeping well.

Yesterday morning I climbed a ladder to take the vent off the side of the house. My roof has little pitch and I couldn’t see thing. Whatever it was tearing my house apart was living underneath a foot of Fiberglas.

Last night, after I undressed for bed, I noticed three wet spots in my ceiling. “Good God, the rat has had babies!” Being appropriately male, I grabbed the narrow end of my fishing rod for an exploratory poke. I hopped it would scare the rat and her new bloody brood off.

Instead, out of my newly poked hole came a swarm of bees! With fishing rod in hand I bolted for the door and then stood outside looking in as hundreds of bees swarmed inside my apartment. I made a dash back in, then out, to grab my cell phone. “Hey, I have this swarm of bees in my apartment!”, I told my sleepy pal whom I thought would have sage advice since he’s a property manager and I figured had dealt with this kind of thing many times. Instead of experience, he turned to Google.

“Spraying the bees with raid or another pesticide is just plain dumb. What If you do kill them with spray and do not remove the dead bees and the hive? Now you have a wall full of decomposing bees and wax and honey that is soaked in poison.” he read.

As they seemed to slowly calm down and congregate on the walls, and they were honey bees after all, I decided that if I did not mess with them I could likely sleep just fine. Though, after being viciously stung by one bee that fell from the ceiling into my bed, I moved to the floor as far from the hole as possible.

When I mentioned the incessant gnawing, Jerry said, “You don’t have bees, you’ve got German wasps! Oh! They’ve got a terrible bite. You’ll likely feel it for a week.” I walked over to the window. “They love the windows, they are always heading toward the lights.” Jerry said on the phone. And yes, sure enough when I looked closely they did not have a bee’s body at all but a wasp’s narrow waist.

“When can you get here?” I queried, more pleading than asking.

While he looks like a typical retiree in his street clothes and old truck, Jerry’s hard to miss in his white beekeeper suit. More home-grown than a Hazmat suit, it says, “Jerry the Bee Guy” on it. We filled a bucket with soapy water to throw the nest in and he went to work while I looked on standing near the door in the event running away would turn prudent.

After the last few evenings of mystery and the horror-flick of last night, it was a fairly straight-forward affair of just vacuuming up the wasps and then cutting out the bit of the ceiling where the wasps had destroyed it to find them. Though he kept cutting the hole bigger and bigger, and finally said, “Ah, there’s the queen and that’s one big nest!”

After an hour’s worth of vacuuming, I am left with a few lonely wasps that were out gathering food while their home and queen were destroyed and a hole in the ceiling.

Scenes from an Extermination 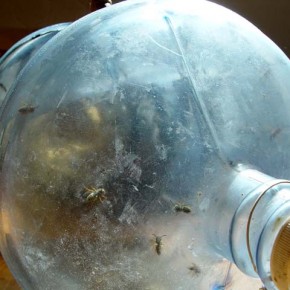 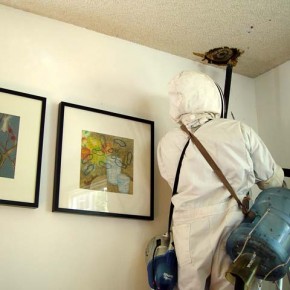 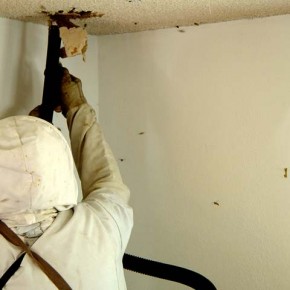 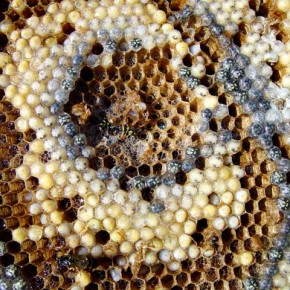 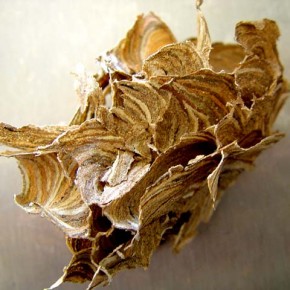 New Ed. Note: Jerry recently has a fine website, filled with straight-talking about wasp removal from your home in the Seattle area. Find him at www.jerrythebeeguy.com

“Spraying the bees with raid or another pesticide is just plain dumb.” that is the phase of the summer!

The fun never ends for you! wow!

To Bee Or not To Bee

ok…weird, it’s one year later from when you posted this and I just did a google search on seattle wasp removal and you popped up third! forgot about this incident, but now I’m going to contact Jerry.

I just did a search for German Wasps, because Jerry the Bee Guy is in my attic right now getting rid of an old nest, and your website came up! Too funny. Great post.

All well and good if the bees are in the house and you are in danger. But my bees are not in the house. I am not in danger. And I paid Jerry $50.00 for 30 minutes of him time, telling me essentially: “You have german wasps. After the frost, they will die off on their own. They do not eat through lathe and plaster they do eat through drywall. Seems to me a decent and fair entrepreneur would have put that info on his website.