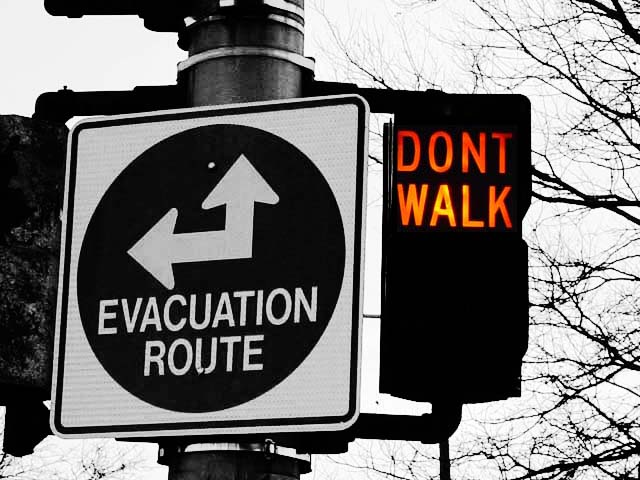 So which is it?

A few weeks ago, I noticed these evacuation signs all over town. I wasn’t sure where they pointed to or what we’d likely be fleeing. They are ominous.

According to the Boston Globe, possible disasters include hurricanes, snow storms, computer malfunctions, and terrorists. While I live along one of the major evacuation routes and am only three miles from the Boston Common, I did not get any information on this plan as I am officially in Brookline. I guess we fend for ourselves in Brookline.

What has me confused about this plan is that I have no idea where I am supposed to go once evacuations begin. The evacuation route ends in Newton. This is about five miles from my house and I have difficulty imagining sleeping in someone’s yard there. Evidently, I should have a disaster bag packed and stuffed with cash, which will be helpful, even in Newton, generally known for already having plenty of cash.

This is the City of Boston’s staid Emergency preparedness website. It does not inspire confidence and is difficult to read. Compare it to San Francisco’s, which elevates your adrenaline as you rush around looking for duct tape and containers to fill with water.

What amazes me most about this plan is the idea that the city could be evacuated in about four hours. Supposedly, police will line the evacuation routes, only providing access to them at certain intersections, and there will be an efficient exodus to the suburban sprawls. There people will likely be fleeing as well, though who knows to which plan or route.

In my daily biking around Boston, nothing I have witnessed leads me believe that 200,000 Boston drivers fleeing the city, will do so in a polite, orderly manner. That the desingers of this plan think so, makes me believe that they don’t get out very much.

What strikes me about the sign is that there are two arrows. How does someone know which way to go. And, really, what if the disaster that one is fleeing from is actually the direction of the evacuation route?

…and on top of that, didn’t you know that all they did was pave the cow paths in Boston, thus, we got our city streets…no grid system here. Nothing makes sense. One year the one way streets might go one way, the next year, they seem to switch, I kid you not.

Don’t worry. Brookline passed a resolution against having to evacuate, so you’re safe.

But in answer to one of your questions, “what would we be fleeing from”, the answer is, among other things, LNG tanker explosion in the harbor (estimated to take out a mile in every direction), the associated LNG and Oil tank explosions at thg refineries and storage facilities, a release from the level-4 bio lab once it’s built, various taraist things. Stuff like that. Mostly LNG tanks and tankers, though, I think.

I think where you’re supposed to go is “away”. The routes are only supposed to tell you how to get “away”. Where you eventually end up is up to you.

The Boston website is, truly, one of the worst I’ve ever seen. Bar none. I’ve been told you can find anything there, but unless you know where it is ahead of time, you’ll never find it.

I think I could probably escape fastest by bike, but it would be hard to take my dog with me without a trailer, which I don’t have. I can’t leave him behind. I guess I’d have to improvise something.

There is no question that getting the hell out of Boston in the time of dire emergency would be best accomplished by bicycle.

Try looking up information on where city pools are in Boston or what the hours are. Impossible. I had a little email exchange with a fellow down in city hall about it and even his instructions on how to get the information was completley wrong.

It is really should be an embarrasment to the city.

Brookline is vehicle bound on the best days …Brookline Ave.will be for Medical vehicles only!All Huntington Ave. traffic will clog route 9 failing to turn left for VFW Pkwy and RT 1,Harvard and Washington Sts likewise will be impassable …MBTA Transit will not run.Infrastructure will colapse
Police and Fire Depts will be overwhelmed.Only cell phones will work but not for long.Muggers, looters, highwaymen,thugs and gang
bangers will be out doing their thing.Families will be franticly searching for children and loved ones -Do yourself a favor get a gun…make a plan…save your family…get food and water ready…visit SafetyMadeSimple.org
Good Luck!