Dusting Off the Bike 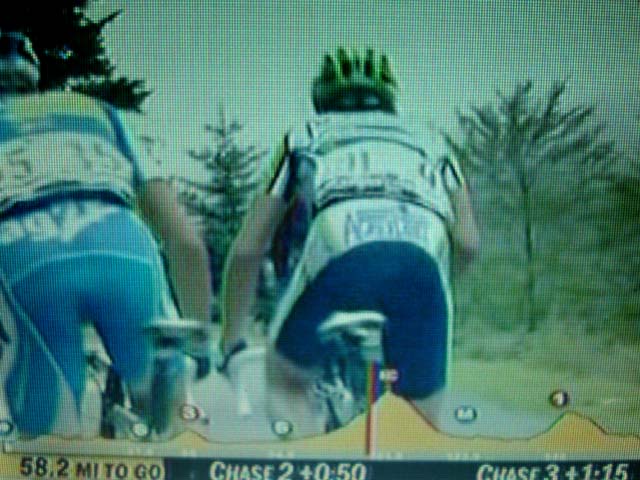 I’ve not been on my bike for nearly two months. No particular reason, it just hasn’t been inspiring me.
Flying from Boston to Seattle, I had the opportunity to watch three hours of highlights on OLN from the previous week’s stages. I’d never seen cycling sportscasts and it helped refocus my 35,000 foot anxiety.

So a few days ago, when I heard of Cascade Bicycle Club’s Cyclefest and the opportunity to watch the day’s rerun of the brutal Stage 16, I mentioned to Dave that I was planning on dusting off the bike and resuming my calling as a bike nerd. With a beer garden, a cool soul band, and typically lovely summer evening, Dave and I lost the bike raffle, but scoped out the cycling hotties and drank a few beers waiting for the show to get underway.

So here is my two second opinion on The Tour: Floyd Landis is a champ! What a ride in Stage 17 after the bonk and collapse on Stage 16. Gerolsteiner is doing all right, but I’d like to see them win the team standing, and they likely won’t. And all I can say about my boy Boonen is I hope that his lungs improve as I read he dropped out due to respiratory problems. I was hoping he might have won the green sprinter’s jersey. He did look good in Yellow!

Here’s what I have found out upon the resumption of bicycling: I am a cycling imposter!

It is now a 2.2 miles commute to work. Most of that I can coast at 30 miles an hour. Biking home? A bit more effort.

The 6 or 7 miles to Magnuson Park was tiring. And that is rather embarrassing. The 200K rando this weekend is out, and instead I’ll try to have Dave slow down so I can get in 30 or 40 miles comfortably.