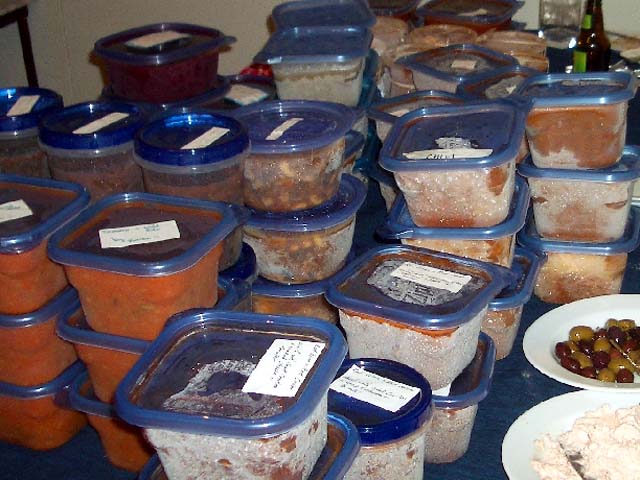 In the dark, cold times of the big wooly sweater, there is nothing better than soup. Long a tradition in Seattle, Soup Swap has gone bi-coastal in 2006.

What I love about Soup Swap is that I showed up with six quarts of the same Red Wine & Red Onion Soup and left with a more humane mix of soup that included mixed vegetables, white bean and smoked pork, lentil, ginger-infused tomato soup, and a couple types of chili! They’ll be a welcome change from my own cooking and particularly handy when I can’t talk Vic into cooking.

Hosting a soup swap is easy! Here’s how to do it:

1. Invite everyone you know, and then ask them to invite everyone they know. There will be plenty of picky eaters and skeptics, but you’ll want as many folks to show up as you can find!

2. Ask folks to bring SIX quarts of a frozen soup. Six quarts is generally the biggest stock pot in most kitchens. I’ve never set a rule on what types of soup to bring, though some soups don’t freeze particularly well, potato and cream soups for example.

3. Schedule soup swap so there are at least two full weekends to make soup. You’ll want to re-assure people that soup swap is not a big long party, so they can swap and dash. Though you don’t want to chase them out after swapping.

4. Once people show up, drink a bit of wine and start the “Telling of the Soup”. This is everyone’s opportunity to explain what makes their soup interesting, what’s in it, and to answer questions.

5. Everyone who brings a soup draws a number for soup selection order.

6. Commence soup swapping. In six rounds, in draw order, everyone picks out the soups they would like. We gave prizes to the first soup picked and a consoling door gift to the last soup left. In a large group, this will likely mean that some soups will be gone, even before the first round ends! Experience proves the “exotiques” go quickest.

7. Everyone should leave with the same amount of soup they came with, except now it’s a wonderful mix of homemade soup.

That’s it! It’s easy to swap soup. Your friends will be grateful for the new variety of food in their freezer, it’s healthier than your mother’s cookie exchanges, talk will turn to casserole swapping or summer soups, and you’ll be slurping soup in wooly sweater-style till spring.

Ah yes, that is so right, Seattle Soup Swapper…

It’s six quarts of soup, frozen into six one quart containers. A quart makes a very nice meal for two.

… and how great and gracious the swap is when the host whips out stuff to nosh on while the stories are being told… we miss Knox, you big soup swapper you!

This comes from Soup Swapping Ed:

Thought you all would appreciate a new soup recipe. This one comes from
my sister Maria who works for New Seasons down in Portland. Enjoy!

Heat vegetable oil in a large soup pot. Saute ginger, garlic, and onion until aromatic and softened, about 10 minutes.

Add potatoes, greens, broth, tomatoes and curry powder. Bring to a boil. Reduce to a simmer and cook until potatoes are tender. Add salt and pepper. Adjust seasonings to your liking. Serves 6 to 8.

For carnivores: Use chicken broth and add chicken or your favorite sausage or bacon.

Now that you’ve got each end of I-90 swapping, what’s next?

you may want to check out this documentary….