Biking Along the Merrimack

Bread and Roses Strike of 1912

Starting in the White Mountains, the Merrimack River once sped the turbines of America’s Industrial Revolution. The towns along it are synonymous with the textile industry, mass immigration, social upheaval, and finally, a near total collapse. Fifty years on, these towns still struggle with repurposing mile-long mills that compose the architectural center of their communities.

It has been unseasonably warm, the last few days over fifty. Despite a lingering vicious head cold, I got on the touring bike for the first time since picking up the one-speed in November. The Brooks sadle felt like butter compared to what I’ve been on.

The first train leaving North Station took me to Lawrence. An entirely planned mill community, it was started in 1847 with great speed by Boston industrialists watching the factory owners of Lowell get rich. I stopped first at the Lawrence Heritage State Park and then went to look at the Great Stone Dam. Finished in 1848, it was the longest dam in the world for several decades.

Lawrence should be most famous for the Bread and Roses strike that started in January of 1912. Led primarily by women affliated with the IWW, it was one of the largest strikes to that time. It was successful in maintaining wages for the 54 hour work week and developing an overtime system, which mill owners in the valley’s other towns then implemented. Perhaps more importantly, it accelerated Congressional action into the deplorable working conditions in the mills and, in particular, ending child labor.

Staying on the north side of the river, I headed through Haverhill. The factories in Haverhill weren’t as immense as the one in Lawrence and look like they’ve been easier to refurbish. Haverhill seemed livelier and more prosperous than Lawrence. It was a shoe town like Lynn. At one point over a million shoes a year were being made there. Notables include Louis Mayer of MGM, who had his first cinema house here, and Rowland Macy, who opened his first department store in Haverhill.

Continuing down river, I wound through Rock’s Village, a charming early nineteenth century village, through Salisbury point and across the river into Newburyport. While the area is slowly filing up with McMansions and other suburban blight, it was interesting how far the lowest reaches of the river feel from the industrial cities. Newburyport is just over 30 miles from Lawrence, but by the 1900’s the entire output of the mills must have been taken by rail to Boston and shipped from there.

Newburyport lacks any of the large warehouses that would have been necessary. Its glory days were in shipbuilding and when that ended in the early 1800’s, there must have been just a bit of fishing to keep the town going. At least that is my guess. It’s now a tourist stop or somewhere to go when you pick up your kids from Phillips Andover and boutiques have taken over the mariner storehouses.

By the time I got off the train in Boston, it was dark and a fog was slowly covering the streets. While my cold is worse than ever today, it was swell to get out of the city on my bike. 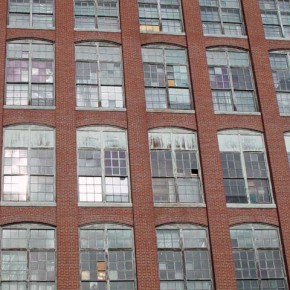 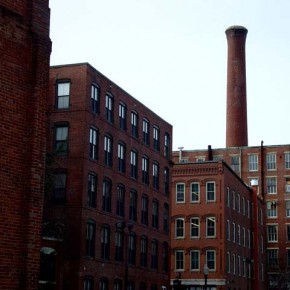 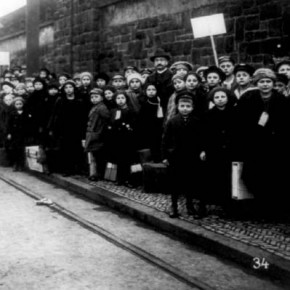 Bread and Roses Strike of 1912 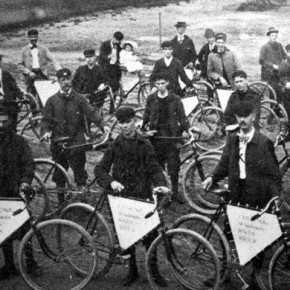 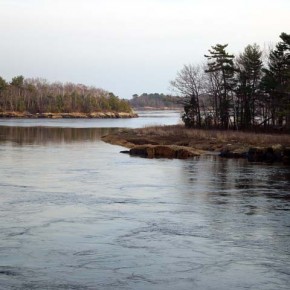 You need to go to Lowell. Visit the Four Sisters diner while you’re there. And that Greek place downtown. Oh, and the canals. And the turbine. Wait for warmer weather though, I’m not sure you can take the boat down the canal in the winter. The park there is quite something, though, with the recreated looms and working turbine.

Also, Lawrence is the birthplace of Robert Goulet.

I was hoping that the first train at the Station was going to be to Lowell and that I’d start my bike ride there.

It is one of the first places I visited when I got to New England last year.

Lowell is super. That park is cool. Definitely in my mind one of the must sees in the area, right up their with the Freedom Trail and looking at the country side around Concord.

Um, I just looked up Robert Goulet. And after looking at his cheesy web site, I am still not sure who he is.

Definitely going to do this ride again in the Spring, as Vic was so sad to miss out, but will plan it out to start in Lowell.

He’s a crooner. Now that he’s gotten older, he’s a sort of a camp actor, like Wayne Newton. (He’s actually very good in those parts.)

He’s been a Vegas headliner for fourty years or more. He’s probably best known (to the masses) for a bunch of TV musicals in the 60s where he reprised his Broadway roles in things like like Brigadoon and Kiss Me Kate. On Broadway, he was in a lot of Broadway musicals, playing Lancelot in Camelot and Don Quixote in Man of La Mancha.

But I realize that may be before your time.

In re Lowell. There’s a lot of modern buisness history there, too w/r/t mini-computers. (I moved to New England to work at Wang Labs.)

Lowell is also the birthplace of Bette Davis and Jack Kerouac.

I worked at Wang for nearly nine years, so I’ve spent a *lot* of time up there.