Bike Nerd in the Garden

Looking out my window, there’s a small patch of vegetables and flowers and it makes me unreasonably happy. For the last two years, I’ve been biking all summer and without a patch of dirt to dig in. When I moved back to Seattle, as fate would have it, my old house was empty and the garden patch next to it overgrown and unloved. It was a very late planting, which I promptly left to spend a few weeks in Boston, but here it is at the end of the summer on the verge of edibility.

When I can, I plant Territorial seeds, as they’re varieties developed for the cool Northwest nights and dry summer. This year, I mixed in some easy flowers since I had a doubts about the vegetables.

There’s nothing like eating out of hand in the garden. The arugula is peppery, the beans crisp, and I’ve even snacked on the carrots, though they’ve got at least 2 more weeks to go. I doubt I’ll see many tomatoes before the nights get too long, but I’ll make some green tomato pickle out of them. 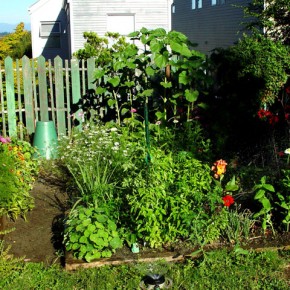