Agua Caliente and the Anza-Borrego

The view toward Sweeny Pass on S-2

State Road 2 runs north-south for 52 miles which follows an old stage route. It’s marked as the Southern Emigrant Trail of 1849, which we later learned was a clever marketing scheme of some of the local Chamber of Commerce men.

At exactly half-way, the geothermal springs of Agua Caliente lie in a fissure along the edge of the mountains. Surrounded by the Anza-Borrego State Park, it’s actually a San Diego County Park. They’ve got a bike/hike plan that let’s you camp for a night for two dollars.

It was Vic’s first time in the desert. With it’s mix of cholla, mesquite, stunted juniper, and blooming ocotillo there was plenty to see. After chatting with my Dad, I am assuming it’s the altitude that defines the desert as the “Colorado” desert, and it’s strikingly different from the Sonoran desert we dropped into after leaving Agua Caliente.

There are two small pools at Agua Caliente, the hotter one is inside a glass house. The shallow one outside fluctuates naturally, and generally is about 90 degrees. Even the showers use the naturally hot water. Evidently quite busy on the weekends, during the week the rangers lock the pools at 5 pm, so it discourages a good number of folks from the 2 hour drive out of San Diego. There were maybe twenty people camping there on Tuesday night, which felt about right.

The ride in the morning took us up over Sweeney Pass for some amazing views of the snow-covered peaks of the Laguna Mountains and the day slowly heated up. By noon, we had dropped down into the Imperial Valley, were buzzed by border patrol helicopters, and humored by one more sign,

“This is the desert. There is nothing out here. Nothing.”

That, however, is as untrue as the commerce boosters manipulation of history.

Inside the Anza-Borrego State Park 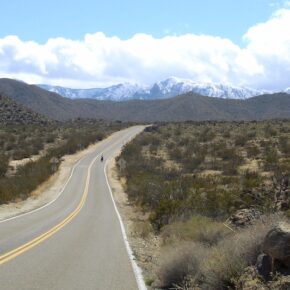 The view toward Sweeny Pass on S-2 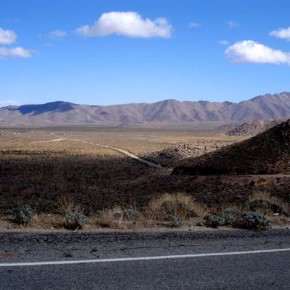 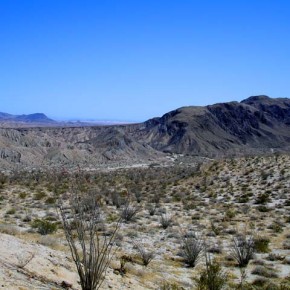 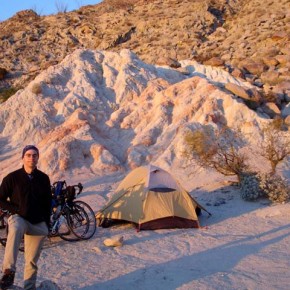 Finally! A bike rate for camping. $2 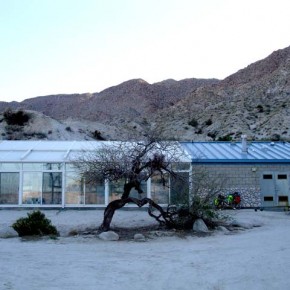 The bathhouse at Agua Caliente