Winter Tour in the Ocean State

“We’ve all been talking about you. You must be extreme cyclists to bike all the way here!” the receptionist blurted out when we got to our hotel in Newport. We were standing there in the stylish lobby, Vic still dripping with mud from his wreck, exhausted and cold. “Aw, we really lucked out with the weather, it wasn’t so bad,” I replied, “and we took the train part of the way.”

This was Vic’s first time bike touring and his longest ride. For me, it was the first time I’ve had my bike on a train, toured with someone else, and visited our smallest state, Rhode Island. I emailed the Rhode Island Department of Transportation requesting their free bike map and some tips. Steve wrote back recommending that we not come: there was snow on the ground and the bike paths were not plowed.

Winter touring takes some compromises and contingency planning. I selected a destination we could get to by taking trains and buses. If we got too cold, too tired, or if the roads really were bad, we weren’t that far from a bus stop. If we were too saddle sore from the first day, we could always bus home. At my age, I don’t think this is wimpy. I think it is smart.

Vic got his first taste of being gawked at while sipping coco and waiting for the train at South Station. A summer rider, masquerading as a MBTA train conductor, treated us like royalty. We used the excellent map of Eastern Massachusetts by Rubel Bike Maps to follow back roads from the train depot at Attleboro to Warren, Rhode Island. Yes, of course, we took one of those famous state line photos. We had great views, though no place to stop, on the narrow Mt. Hope Bridge and a harrowing ride on a portion of Highway 138 on Newport Island. I’d recommend finding alternate routes. The last five or six miles were lovely and quiet taking Wapping Road to the lower end of the island and the beaches east of Newport.

Along the way, folks in cars whistled, waved, and cursed and we got props from the few day cyclists: a solid effort for a pair of tourers. We ate like horses at Lucia’s and slept the sleep of the weary and dreamless.

As for our contingency plans? The second day found our bikes on a bus. Not that we woke up explicitly planning that, but after a 10 mile spin to look at the beaches and the famed mansions of Newport, we had concerns about running out of daylight. With stopping for snacks, getting lost, and Vic’s spill, our trip to Newport took 6 hours and the last thing we wanted to do was be out on the side of an icy highway in the dark. The surprise for us at the depot was a Peter Pan bus direct to Boston. My research and plans relied on Rhode Island public transportation with three transfers and a short ride to the train station at South Attleboro. This is doable and it never crossed my mind to look into private bus services. On some routes, Peter Pan charges a small surcharge and slides your bike underneath. This obviously opens up wider range of New England weekend touring options. We got a bit more time in Newport, no dashing for connections, and were home by dusk.

Unless you are a masochist, it is hard to stay excited about biking in Boston. It’s cold, the drivers are aggressive, and the streets potholed like Slovakia. However, with a bit of planning, a dose of caution, and luck with weather, there are some great options for weekend touring. Hotels are empty and rates are low. You might not find all the attractions open, but the ones that are aren’t crowded. The ice cream stands are closed, but hell, it just gives you less guilt about eating hot cinnamon rolls and drinking hot chocolate. And after all, you are on your bike…

Next tour: Cape Ann, MA
When: End of February

Yes, you can bike tour during February in New England 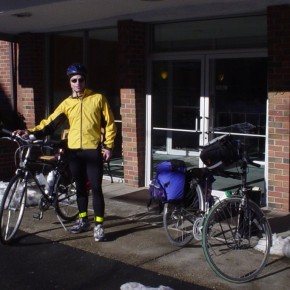 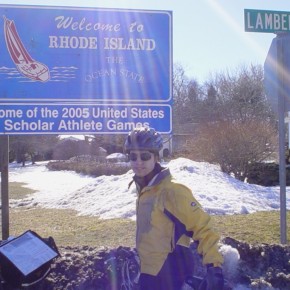 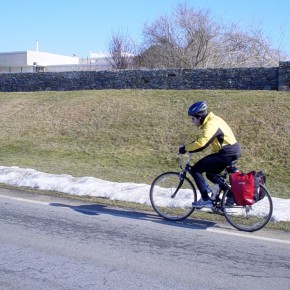 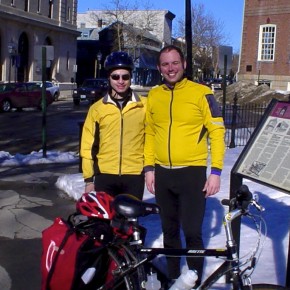