Winter is One Speed 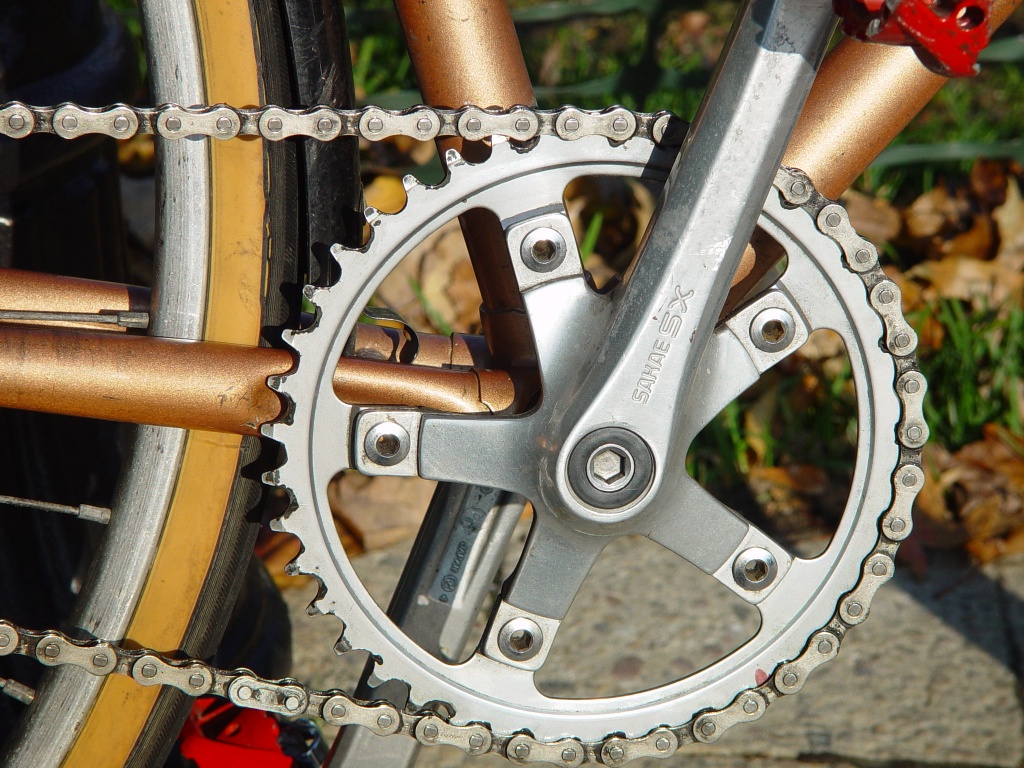 Here comes winter! So far, it looks hell-bent and furious. I’ve got a fresh usability contract, I’m trying to pick up a few degree credits writing about Medieval travel narratives, and I’m lending a hand on a Jewish History bicycle route here in Boston. Throw in the fact that I’m also trying to get more time in the pool and on the XC track, and Outlook is melting under the weight of the to-do list. Luckily, one thing I won’t be doing is cleaning my touring bike. Craigslist came through again!

The illness for a fixed speed has been cured, or at least smacked into remission, with an oddly pieced-together single speed. Not a fixie, mind you: I still coast. But I can wear heavy boots, a wooly hat, and big gloves because I won’t be shifting gears or twisting out of pedals. Salt, sand, and grime, well, ok! Big deal. There’s not much on this bike to destroy.

Here’s how the seller described it:

This bike is an 80s univega frame converted to a single speed freewheel bicycle. The bike has a 42t chainring with sakae cranks and a 17t freewheel on the rear wheel. The bike is fitted with a dia comp front brake mounted on bontrager straight bars. Also included on the bike are full fenders, it would make a great commuter or winter weather bicycle. The frame is 57cm which would be good for someone 5’11 to about 6’3. This bike comes complete and ready to ride.

It is ugly but feels extremely agile and tight compared to my touring bike. I can’t say I was completely comfortable dashing to work on it today. Rather, it felt like an awkward first date with promise.

Next winter you could get a “flip-flop” hub — one that has a sprocket on each side. One is fixed, the other is freewheel; you change from one mode of operation to the other by removing the wheel and turning it around.

(Of course, I am thinking, you must know all this…as a person who shares a passion for bike parts I recognize all the telltale signs).

Isn’t it nice to be able to have a bike just to hop on with regular shoes, too? Clipless is great, but it’s great to have a flexible town bike. Speaking of flipflop, my town bike has Shimano pedals that have SPD clips on one side and a conventional flat pedal on the other. Very convenient. When I ride around the neighborhood, or towing my kids in the trailer, I use the flat side; when I have to go somewhere faster, I unhitch the trailer and use the clipped side for more efficient pedaling. Here’s my town bike.

Thanks for reminding me of the flip-flop hubs. They fellows at Harris were telling me about those a couple weeks ago.

I am pretty stoked to have this bike that is going to require almost no care and that I can just hop on. The bike came with some alternating clip/flat pedals. I had talked Vic into trying them last year, but for most long riding, he like I, prefers the double-sided SPD clip pedals. The pedals that came with this bike are very large and have a nicer base than the ones Vic has, so that is good for winter boots.

We are thinking about a trailer or xtracycle so that we can haul stuff around (we don’t have a car), but then I don’t know, it is not often that we need to haul anything around more than our bikes.

Finally, I’ve got to get back over to Watertown to take a look at the Armenian museum and eat some food!