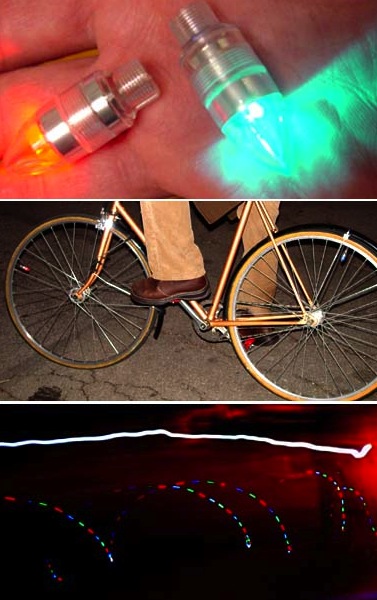 Up in Halifax, Steve commutes all winter. Halifax is colder, darker, and mountainous compared to Boston. In these conditions, anything to get noticed on your bike is worth trying, and so I’ve been curious about his recent experiments with Tire Sparx.

After a couple weeks of looking, I finally found a pair at Back Bay Bicycles as I was walking from work to pick up the new Madonna cd on Tuesday night. Admittedly, the tingling homosexual in me was a bit excited for the hyped all-dance album, just like the old days. Vic, the man who won’t let me use his Madonna “Re-Invention Tour” mug, even if every other coffee mug in the house is dirty, was postively jumpy, or should we say ‘a bit light in his loafers’? It was a bit surprising then, that when the CD ended and the player cued up Death Cab for Cutie, Vic didn’t make a move to switch it back. He looked at me and said flatly, “That was rather disappointing.” Hell, we’ve been giving the new Paul McCartney more play, and he’s nearly as old as my grandparents and does not have orange hair or good dance moves.

I am not exactly sure how Tire Sparx work. Small, cheap, and plastic, they screw on your Schrader valves. They are extremely senstive to motion and often start blinking if I walk by my bike. I am curious how the batteries will hold up in the cold, if at all. I think they are cute, and yes, a few people have looked rather askew at me, but I’ve not ridden enough at night to decide if the notoriously vicious Boston drivers will pay more attention to me and my bike.

I’m a bit too much of a snob to want these on my “official” bike, but having Tire Sparx is like throwing yourself a disco party when you are twelve. It’s a damn giddy lo-fi good time and was the “way funner” purchase of the two.

I’ve read his comments about the TireSparx, but I’m really dissapointed to hear they are Schrader only. That doesn’t do me that much good. I mean, I could put them on my cargo bike, which is probably the most important, but it would be nice to be Presta-compatible.

I’ll take a jog over to BBBike at lunch time. My favorite Indian restaurant is over that way anyway, and it is Friday after all.

Yep, I agree bummer on the Presta, but then how many kids bikes come with presta? Italian kids bikes?

If you are going to India Quality there on Commonwealth, I am incredibly jealous. I’ll have to wander over there next week to check out the ubiquitous Indian lunch buffet,now that I am working from home.

The Tiresparx are Schrader only, but the manufacturer has another line that has Presta valve models; see their “more serious cyclist” page, any colour you want so long as it’s flashing red. Down near the bottom there’s the Presta valve model listed.

Of course, there’s also blinky LED pedal reflectors, hokeyspoke-esque “safety spoke reflectors”, and elsewhere there’s my favourite, strips of LEDs that can be attached to the frame.

As I’ve mentioned before, I’m a sucker for blinky LEDs. Did I mention I’m looking for battery powered LED christmas lights now the season is fast approaching? Oh yes… World blinky domination shall be mine!

I’m back. Every time I go in that store, I like it less and less. The salescritter is really high pressure, but more than that is their prices. Now, I’m all in favor of paying a wee bit more to support LBS, but they had these things for sale for $12.99. It has a $7.99 MSRP. Sorry. Even with shipping, it wouldn’t cost that much. Plus, they only had the three-tone ones, and from YHZ’s experience, I’m aiming for blue. Better to fool them into thinking I’m a bike cop. Or something.

I didn’t end up going, but normally I go to India Samraat on Mass Ave. Excellent chicken vidaloo.

I can’t say that I like that store to much either. It’s always aggressive and honestly, it doesn’t seem like they actually sell real bikes there to me. That said, some folks like it, I’ve seen some racer boys there, and also they were very nice helping a fellow who looked very down-and-out with his clunker.

I had no idea that the Sparx were MSRP at 7.99. Man, that sucks. I too wanted the blue ones after hearing S. go on about everyone clearing out of his way with them.

I’ve not tried that Indian place.

I’ve got something similar called TireFlys which are schrader also, but I picked up a couple valve adapters for a buck each that I leave on my prestas. I got mine through my LBS, but they’re $6.99 online.

They’re great for being seen from the side…you’ll be a party going down the road, especially with the choice of plain, stars, skulls or flowers!

Oh man, and I see the tire flys in metal. That seems smart. That said, I still can’t see using these on my touring bike. I guess I am bit of snob.

However, on my about town one-speed I am thinking those flashing handle bar grips are way cooler than the red star grips is saw at Back Bay Bikes. I was thinking of pimping my ride a bit old skool, but all these flashing lights dovetail nicely with the upcoming First Night Parade!

well….
I have no issue with mounting the TIRESPARK on some presta adaptors
have done such for DICE and SKULLS
but honestly
spokie dokes have always been more my style

oh
that new Madonna album rocks
Madonna is on a roll…. her last three albums have been her best

the only person I know who got the latest Madonna release before myself?
my wife’s hair dresser Blaine bought it the day it came out
the day prior to myself
so Lisa got to hear it as she got her hair cut

Once again, you prove that straight people are truly deficient and time-lagged when it comes to music to shake your groove thing to.

I am so sorry for you.

I was in line with 10 homosexuals clammoring for the new cd at Virgin on release day… I rushed home to present this to Vic, we were ready to dance around the living room like girls, but no, I am sorry, it really is boring.

As a matter of fact when she word sings, “I love New York, all other cities make me feel like a dork,” I have to rush over and kill the cd before my head explodes due sonic and lyrical stupidity.

[…] am however, on the hunt for a new set of Sparx and despite my being snooty last year about putting them on my touring bike, it is now my only bike and I do need to be riding […]