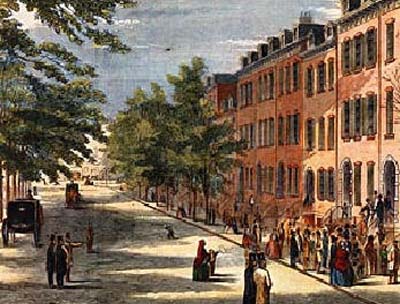 New York is a commercial town. You could track the morality of it (and its inherent conservatism) through its business. Touring the Seabury Tredwell home, now the Merchant’s House Museum, you can gain a physical understanding of how the rich trading class lived during the 1840’s, though little is known emotionally about the Tredwells specifically. The youngest of eight children and the last of the family, Gertrude died in 1933; the downstairs parlor covered in dust cloths, the house mortgaged. The East Side neighborhood around her family home, once the most desirable neighborhood in New York City, was now grimy and industrial.

Returning from another weekend in NYC, I spent my time on the Boston-bound bus struggling with William T. Vollmann’s Rising Up and Rising Down and a chapter on the morality of defending class through violence: Stalin, Marx, the altruism of ants, the gift rites of the Huron, the role of slaves in democray and capital accumulation. The whole time I was trying to shut out a small child humming a repeating tune of Frere Jacque by listening first to Clem Snide and then to Eminem: neither conducive to wrapping my head around a morality of class and both rather tedious.

Our docent guessed that the Tredwells may have assumed they could make better marriages into society than was really possible, leaving four of their six daughters unwed. Perhaps after the Otis School, then the finest finishing school for girls in New York, the young women were deluded by their worth and their future in the confined social world of New York. But there are many reasons one dies alone at 92. And of course, Gertrude still kept a servant who disappears from the story into the desperation of Great Depression.

At the opposite end of the Manhattan, as Gertrude lay dying, John D. Rockefeller Jr. was building a museum hold the recently purchased collection of George Grey Barnard. At center of the collection, and of the physical building itself, are the fragments of Cuxa Cloister Barnard bought for a pittance from farmers in the Pyrenees. Barnard, who lost his fortune once, was recreating it by trading in antiques to feed the tastes of America’s newly rich. The French legislature hastily forbade the exportation of its medieval heritage when they learned what Barnard up to, but while he handed some back, he was quick shuttle out most of his trade. He called his Washington Heights gallery the The Cloisters. It would keep this name when it opened five year later in the center of a park expanded from a private estate and traded to the city by Rockefeller for a piece of Midtown. I suppose labor for the “wild” park landscaped with its many stone terraces must have been cheap during the Depression.

The scale of wealth in New York exploded after the Civil War, when industry and its correlation, exploitation, expanded nationally and then globally, from the regionalism of Tredwell’s time. Born a generation after Seabury Tredwell, Rockefeller Sr. and his contemporaries would acquire wealth and estates that would dwarf the simple fortune of the Tredwells. New York contains the largest concentration of treasure in our country, even with shift of government and its interests to Washington and the new wealth of the West Coast. At its wealthiest, only London and the capitalists of Liverpool and Manchester could match New York’s veracity in art and ornament and the Americans had more to prove: hence the fine collections of art in the city.

I like visiting The Cloisters and its quiet, stone removal from the hustle of New York. I enjoy the cipher of the Christian allegorical art. Spring is just returning to New York, so only a few yellow buds were out on a heavily pruned tree on the West terrace.

I can only read in fits and starts on class and the corollary violence in Vollmann. I’ve struggled with this book for well over a month. I struggle with the abstraction; and Stalin, Russia, collectivization and the famine are abstract in their scope and monstrosities. What I connect with are these simpler stories and their intersections with history, something easier to grasp and touch (if it wasn’t in a museum): a bit of land speculated and traded for better land, a national patrimony sold off and used to impress a glittering party, and a lonely old lady looking out her window at a drab neighborhood that used to have only the finest carriages.