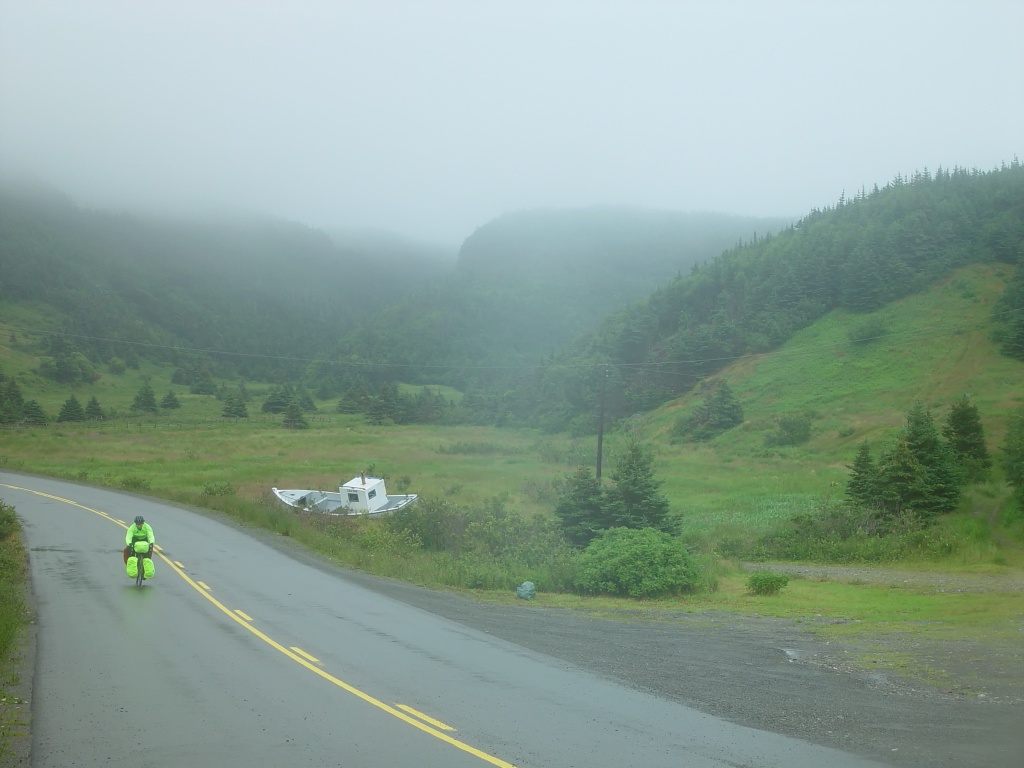 “It’s just a wee hill, mainly flat. Ye two can probably get up it with out pushing your pedal bikes,” the friendly store clerk said. She was a vicious liar, though I have a hard time holding grudges against folks who refer to me as “ye”.

Newfound-LAND has been simply, purely amazing. From the dizzying fogged-in descents and pushing the bike up out of cove after cove on the first day on the eastern coast, to the wind swept barrens out of St. John’s, every day has included at least one jaw-dropping moment, usually more.

Highlights include:
Standing nearly over the bird colony at St. Mary’s, where thousands of gannets, the largest pelagic birds of the North Atlantic, nest to raise their young.

Watching the sheep ford the shallow river that dumps into the small harbor at Branch, while having coffee with Basil and his family and learning more about the Irish immigration during the 1750’s. Basil says that most of the towns on the pennisula are 100% Irish Catholics, and it’s like Ireland was 40 years ago. I can believe that.

Hiking over the narrow cove at LaManche, a fishing outport destroyed in the 60’s by tidal waves and spending part of the afternoon out at sea, looking at puffins. They are shy.

Riding the bikes to Cape Spear, the furthest point east in North America. There were whales. We took the ubiquitous photo and met a few of the Trans-Canada cyclists who end their trip here.

Eating. Thus far, between Vic and I, we’ve tried cod tongues, fish and brewis (which is a mash of salt cod and hardtack), moose pie, and fish chowder and more fish chowder. If that weren’t enough, it appears that the national dish of Newfoundland maybe be the french fry. It is odd to watch Vic devour carbs.

The other night, I was walking under the meteor shower that’s been going on to get some water. The park rangers pulled up in his truck to make sure everything was fine. It was nearly 10 pm. We got to talking about the biking Vic and I are doing. The older of the two happened to be from Branch. He said, “Oh! They are always trying to get me to come down there for some dreenkin, paartyin’, seenging’ and they say, if ye can’t come down for a week, don’t ye bother coming at all!” It seems to be the Newfoundland way.

I told him we were already looking forward to coming back as it’s difficult to see all the things you’d like to see when you move so slowly on the bike. He told me, “Next summer, when you come back, you’ve got to leave your pedal bike at home and get yourself a Harley-Davidson.” I leaned in conspiratorially into the truck and stage whispered, “Oil is for sissies.” He slapped my arm as the younger ranger laughed and then they drove away. 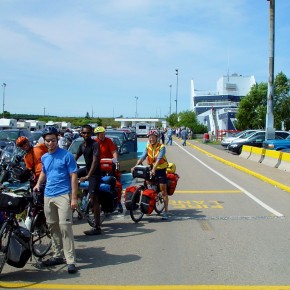 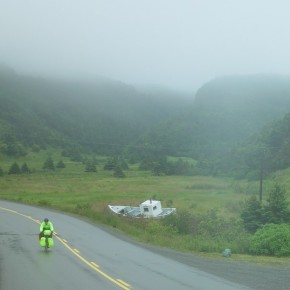 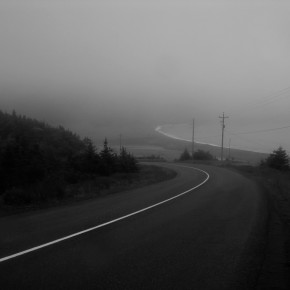 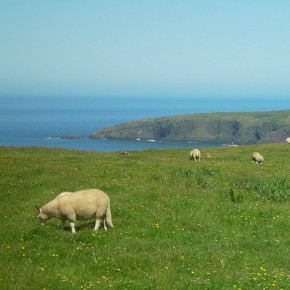 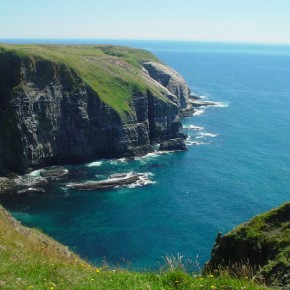 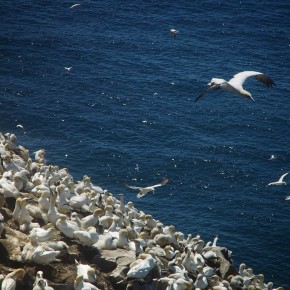 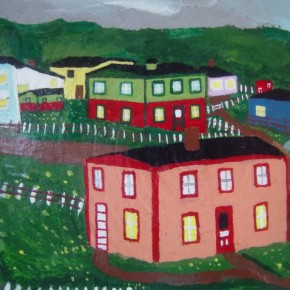 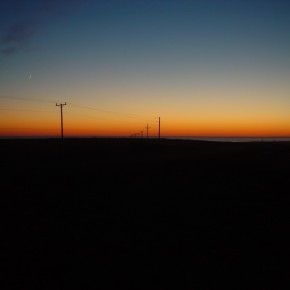 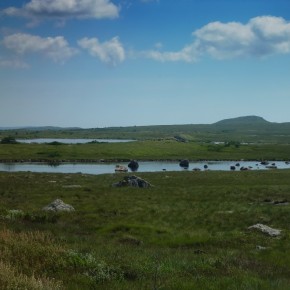 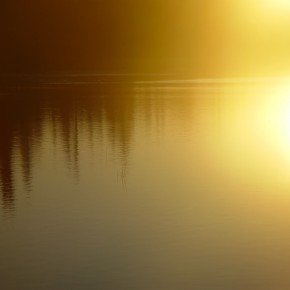 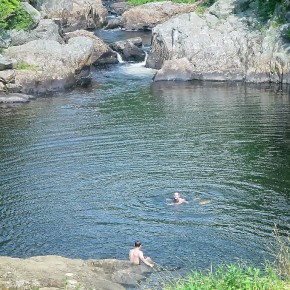 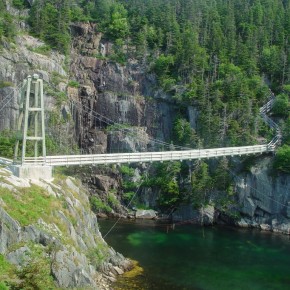 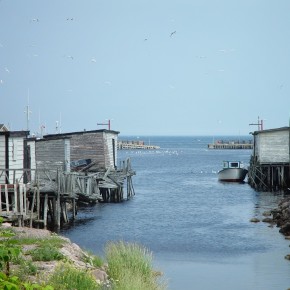 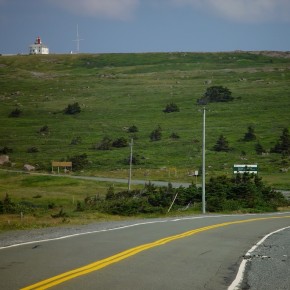 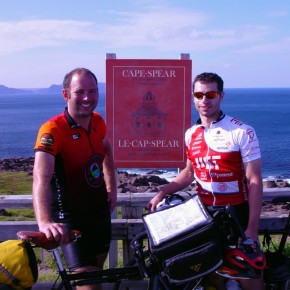 We thought of the two of you many times in the past week, wondering how you were making out.

From your blog it sounds like you are really enjoying the Newfoundland experience. What was your Saturday like cycling from Argentia to St. Bride’s? We had a tail wind for most of that day and by the time we were setting up camp close to Salmonier, the sun was trying to shine.

We last saw Gary and Roger along the Trans Canada Highway about 40 km outside of St. Johns, when they had to repair a flat tire.

We left St. Johns today – Aug 13th and see that you have arrived. Have you done much hiking on the East Coast Trail?

If it is any comfort to you – Pauline had to push her bike up one of those hills going into Cape Spear – was that ever steep!

Which route did you take out of Witless Bay – the big hill or the side route that permits one to do the hill in a more gradual fashion?

Best of luck on the rest of your Newfoundland journey – we will be following your trip with great interest.

Found you while googling Newfoundland. Really enjoyed reading about your trip. Thanks for sharing and the beautiful photos.