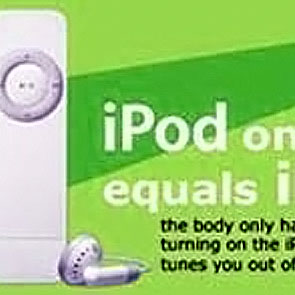 I often like riding around on the subway with my mp3 player, blocking out all the grime and existing in my own sonic parallel universe. Every now and again, I’ll walk to work blaring some songs that I can’t play at home since Vic and I have nearly opposite musical taste and our compromise is silence which is preferable to Andrew Lloyd Weber.

While biking down in D.C., Joel has noticed the same thing I have here Boston. People are turning into idiots in their efforts to shut out the city. Or iPods highlight the inherent selfishness of people in the public sphere. I am not sure which. He’s designed this logo which I think would make a fine sticker campaign along the Charles River Trail.

It’s not only the runners at fault for deteriorating trail etiquette, blaring their iPods so they can’t hear you screaming “On Your Left!” and ringing your little bell. Cyclists biking too fast in busy sections of trail, without lights, passing without warning, and often with their own iPods, bear responsibility, perhaps more so. Cycling with an iPod is like riding in the dark with sunglasses. No matter how slow you cycle, you are still moving too fast to willfully block out the environment around you.

In the hierarchy of use, we must yield to pedestrians, even the ones with their wandering minds weaving on the trail having their own mental “Rocky” moment. Yielding is hard to do if they can’t even hear you. So in addition to wanting a “Nano” for no notable need, I have been thinking about getting an ear-splitting air horn for my bike to remind the sonically absorbed joggers that other folks are on the trail.