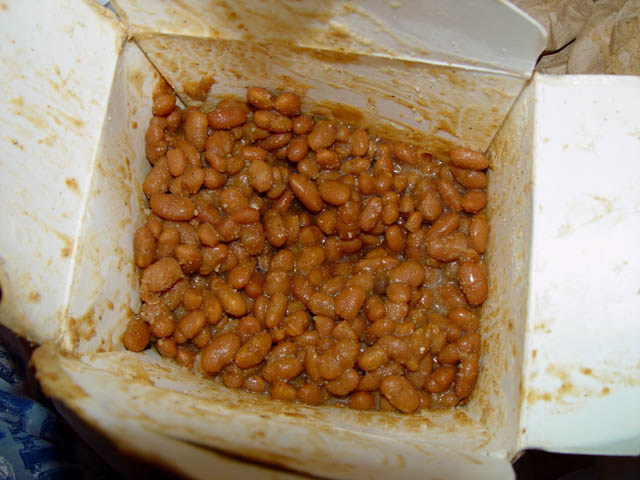 I’d read that there was a donut shop near Wood Island that made Boston’s best beans, though only on Saturday and open only in the morning. I couldn’t recall the name or any other specifics, so this past rainy Saturday, I talked Vic into a wander with the plan of walking in the most obvious direction from the station and doubling around, block by block if necessary.

North is the most obvious direction and it will take you up Bennington directly to Betty Ann’s Bakery. It’s a huge old-fashioned shop, though the wooden cases were nearly empty when we got there near closing time at 11:00 am. They had five plain and three sugared donuts. These are real donuts: they’ve a decent tooth and heft, and though a bit bland and with a too heavily fried crust, are obviously made by someone actually mixing flour instead of opening an industrial package of pre-mix. The beans were in the back and we got a pint for dinner.

I like East Boston. Maverick is my favorite bustling “T” stop in the city, I like taking the subway to the beach at Revere, and there might be ok bird watching in the marshes along the way. I like the Blue Line trains rumbling in for “Wonderland”. Our walking tour of Bennington loosely followed the “T”, eventually reaching Beachmont. What I thought might be the sheds of a giant swap meet (oh, beating heart!) was, in fact, long horse stables.

I’m no gambler, but I enjoy an occasional day at the races. I like the mystery and ritual of it. I’ve been just enough races to kind of read the board and understand the announcements, but I don’t know how the old guys pick the ponies or what they study in the Racing Form. It was a sloppy day on the track and few people ventured out to see the horses gallop by. I took Vic out to explain to him the little I knew about the winner’s circle and that brief, quick pleasure of the horses on the track with the crowd behind you yelling their money on. It would be a more exciting world if we all horse names: Tickle Me Red, Kiss My Wind, Banshee Bridesmaid, My Peanut, and Judith’s Triffle were my favorites of the day. It makes me not mind Vic calling me “Ruthless Dictator”: it sounds like a good name to post with. 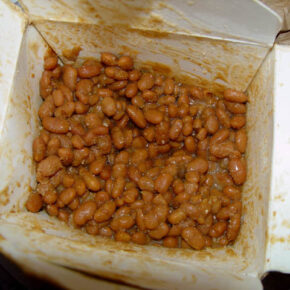 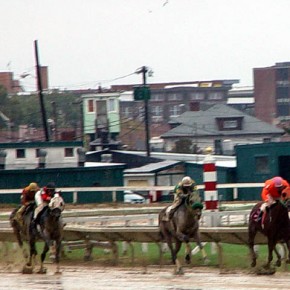 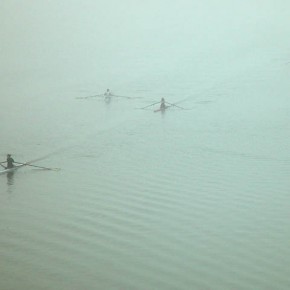 Crew on the Charles


Let me tell you about the beans we brought home. They were the best pork n’ beans I’ve ever eaten. Sweet, a bit tangy, not too much sauce and tender, but definitely not vegetarian as I pulled out a delicious bit of meat, shreaded it and smacked my lips. Again: only on Saturdays, before 11 am, 4 or 5 blocks north of the Wood Island stop.
BostonFood

Oh carbs! Woo hoo! Always worth looking for, particularly since Vic-I-Need-Abs is always so anti-carb here at home. Me, my hairy beer belly, and my bike will have to go scouting for this place. On the map it appears somewhere close to the Russian steam bath I want to try. This is a very mysterious and awkward neighborhood to go to, no?

I’m virtually certain this is the place. How many pasta bars can there be near that spot on Main St in Everett? It’s very awkward to get to, and I’ve only been there by car. It *shouldn’t* be hard to get to by bike. I’d take the Orange Line to Wellington and go from there. Certainly easy enough to get there on foot, but getting across the Malden River by bike is tricky.

Everett is a nasty place to cycle in. The roads are narrow and dirty, and the drivers are downright mean.

Anyway, this place is famous for ravioli. MMmmm MMmmm.

Ah! Yes, it’s the right place. The pasta bar is the take away (there are a couple tables) next to the wholesale place: Lilly’s

Get the Lobster ravioli. Werd.

I pulled out my Rubel map of East MA, on which I had highlighted every road I’ve taken. I am a bit obsessive about this, becuase I like looking at new things and so it is a good mental reminder to go find some thing different instead of the same old ride.

I have been around Everett, but never in it. I can recall now the nasty roundabout at the top of Charlestown and clearly if I could get across it, I could be right in Everett. So it is not that far.

I am going to get my winter light on, tape up some new reflectors, fix my cleats and maybe go for this tomorrow afterr work. What the hell, lobster ravioli sounds awesome.

Just looking at the rubel maps have got me all winsome from riding as I have not really been on mmy bike since getting back from my long trip. Though this is normal for me: after such a long ride, I geneally just want to walk around for a couple months.

BTW, I once had a cop pull over a particularly vicious driver as I was trying to find the Mystic River trail/Malden. I could not beleive it. It is hard cycling and depressing.