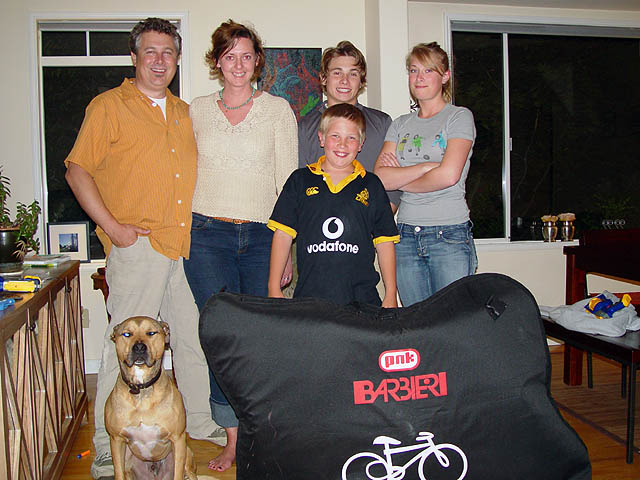 Once again, my bike has found it’s home in the travel bag and it’s time to return to Boston. In describing life with the McKeagues, calm is perhaps the relative term. The others, well, I stand by them by any standard. It’s been nice to be home with my people.

Seattle is many things, but it’s not a cab town. I’ve been doing an inordinate amount of cabbing for work. This requires planning ahead and calling around. I learned that the Punjabis are fighting, there are Hindis in Fiji, and if you say you’re not from around here, the cab drivers will wax poetically about the city and then spend the rest of the time asking you about the weather and driving in Boston. Both make it easy to give ’em props for sticking to Seattle.

It’s odd to lie to a cabbie. But after an intense nine months of exploring the East Coast, I tell them I’m from Boston. And I guess at the moment I am. Tonight, I told Vic, “It will be nice to be home.” I still articulate my “R”‘s, so any of those toughs in the Bay State would see right through me. But so you know, when we make the transfer tomorrow night at Government Center, I’m dropping the bike bag and getting a Buttercrunch donut at the Dunkin Donuts buried underneath the ugliest non-square in the city.

ed. note: Of course the Green Line was slow. The tram in front of us caught fire. A fire truck was following it down Beacon, spraying it now and again as they tried to make the switch at Chesnut Hill to avoid shutting down the line. I really had to go pee, was stressed out from flying, and my bag was much to heavy. I can not stand the Green Line. While Seattle desperately needs a transportation system, an in-traffic tram is a slow, terrible way to go (and at least the MBTA is a lot more frequent than what is being proposed for the Seattle light rail).