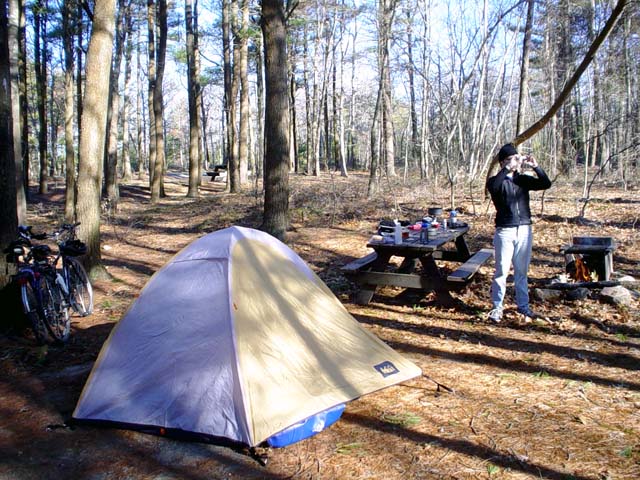 First, it is much smaller than I thought. Second, it is kept in cage. Plymouth Rock is nothing like I thought it would be.

I’ve been warming Vic up to the idea of bike touring in phases. Our first trip ended at a boutique hotel, the following trip our lodging was not as nice but we still ate fancy food, and finally this weekend, we stayed on the cold ground and swallowed insta-meals. A decent weekend with full bikes and short distances, it was to be a low-stress way to try out my new tent and his new sleeping bag.

What we got was a trip with one long stressful road, a frightening bridge crossing, a subway ride and perhaps some of the best day of cycling in MA yet. The weather was on the edge of warm and I’ve actually got just a hint of cycling glove tan.

We used the MBTA to get a late start to Plymouth. After looking at the Rock and having lunch, we had to skip Plimoth Plantation. I am fixated on the Puritan character actors so we’ll probably make another day trip. Route 3A is the most direct route to Cape Cod from Plymouth but is busy with not much of a shoulder. I could not recommend this to inexperienced cyclists. The Rubel maps show an unpaved road from Plymouth that may be a nice ride if you’ve got a mountain bike.

I misread the early season campground guide and took Vic to Scusset Beach. The campground here is mainly a field for RVs and right on the bay. At this time of year, the bathrooms were locked tight. So we backtracked to go to Shawme State Forest. To get there, we crossed the Sagamore Bridge riding in a lane of traffic. Easily the most hair-raising bit of road we’ve been on yet. Evidently cyclists are to use the east sidewalk, though riding through the terrifyingly fast rotary, it is completely unclear how to access it.

While both sides of the Cape Cod Canal have a wonderful bike lane, access to and across the bridges (even make a decent short loop ride) is non-existent. The route over Sagamore Bridge is also part of MA Bike Trail 1, though the signs are mysteriously absent over this most treacherous bit.

Shawme State Forest Campground is a perfectly acceptable car campground. Vic woke me up wide-eyed and we listened to a small animal eat our crackers at 3 am. It had managed to slide the food pannier out from under the rain fly, open the zipper, and get the crackers out. Of course, as Vic says, it only proves animals are stupid because it left the organic chocolate bar in the bag.

After a lovely warm-up spin along the canal on Sunday morning and a quick strategy session on crossing the Bourne Bridge (walking on the sidewalk), our ride back toward Boston was much less stressful than the ride down. Taking back roads through Onaset (oh lovely!) and Wareham, we walked on the beach and looked at drained cranberry bogs. Opting to get home with plenty of time to do our weekly grocery shopping, we took the train from Middleborough. Unfortunately the train was running on half an engine, so we were quite delayed and instructed to take the subway from Braintree. So yet another first: having our loaded bikes on the subway. Bikes are allowed only in the last car on the subway but not during rush hour nor on the Green Line. We got off at South Station to avoid the congestion at Park Street.

Honestly, this trip is memorable only for its functional camping warm-up. A bit more time in Plymouth would have been nicer, staying at the campground on the beach would have been more interesting as we could look for birds, and a bit more coastal riding would have been lovely. Still, not every day on long trips is note-worthy, the weather was superb, and the new gear works like it is supposed to. At least we were biking…and getting started on the tan. 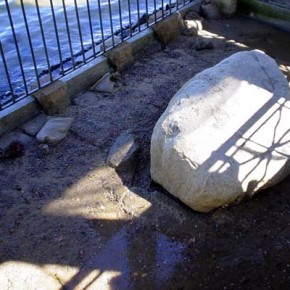 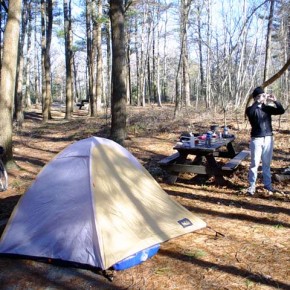 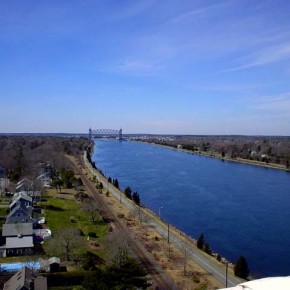 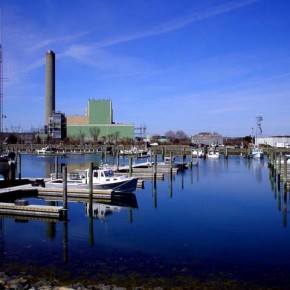 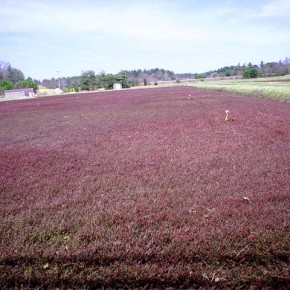