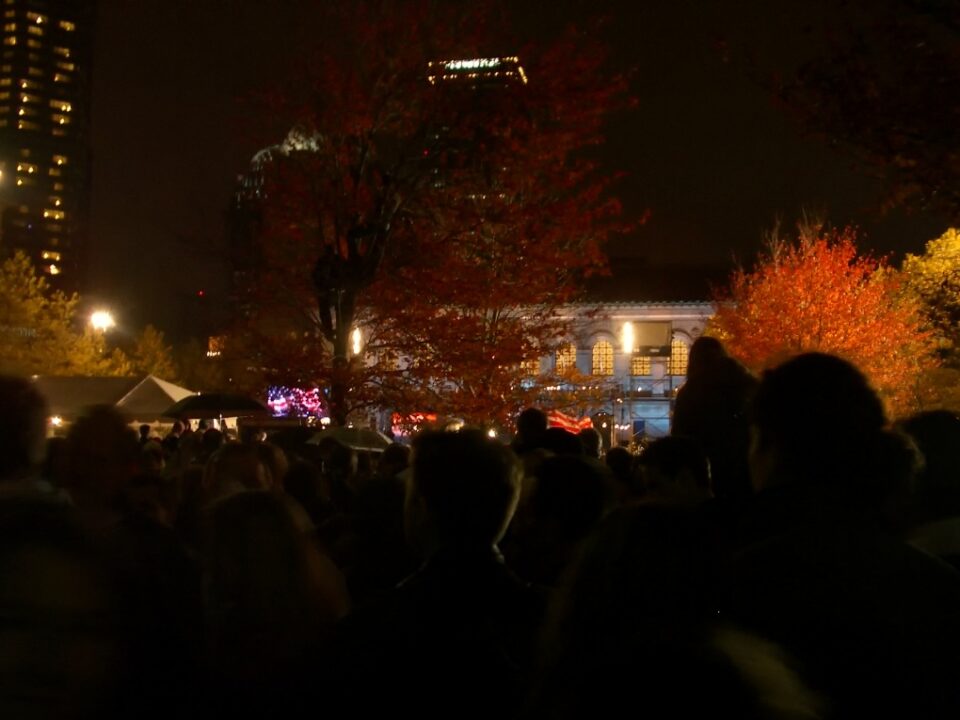 I should have stopped believing when Bon Jovi came out to do an acoustic version of Living on a Prayer. I did not. I was waiting in the cold for Ohio results. Despite the map slowly turning red, it was no reason to feel the party was going to end. We knew that would happen and that the election would hinge on a few votes in a few places. But we did leave early due to boredom and found a gay bar to watch the results come in. One might as well be warm.

This was an election of firsts for me. I had never given money to a campaign before, never been to a caucus, never been to an actual election rally before. I have never felt sick or drank heavily after an election. All of those things are new to me.

My friend Pam is a true heroine. She actually picked up the phone and worked this election. I spent most of it talking and emailing to like-minded people and explaining the Electoral College to Europeans. When it came down to the final weeks, I did not send in an extra $15, nor did I get on a bus in Boston and make the canvassing trips to New Hampshire or Maine.

The failures of the current administration were manifest, and while I did not particularly embrace Kerry, it was clear from the debates that he was smart. The plan he kept repeating lacked vision, but perhaps that where we are as the left. The election cycle ended for me by writing scathing letters to various Democrats decrying their centrist policies, their support of DOMA or the Patriot Act, and many other evils they perpetuate in the name of corporate breaks. As you might suspect, most of the letters were quite over-the-top. I really wanted the endless flow of junk email and begging to stop.

Now I am taking a deep breath and getting more real.

It is clear to me that we live in two countries: one urban and one basically rural in outlook. As the party of the left, the Democrats have failed urban voters by maintaining a folksy idealism of an American past that never existed. Kerry dressed as The Goose Hunter was complete pandering. I now think we must stop pandering to the rural vote. I dislike paying taxes as much as the next fellow, but I am particularly galled having my tax dollars go out to building highways in Eastern Washington for anti-government wing-nuts who consider the government subsidies of irrigation and discount range their god-given right when we still don’t have decent mass transit in the city. This is an extreme view, but perhaps we are living in extreme times. I want the taxes that I pay to go to make my life and the lives of those around me better.

The Republicans have done a fine job of dividing folks up along color lines, religion, and sexual orientation. But 49% of the vote is basically coming from city dwellers. In the West, almost every state has one large urban center that could turn that state blue. Nevada and New Mexico potential swing states because their urban centers now contain as many voters as their much larger land areas around them. We are captive to the rural vote. 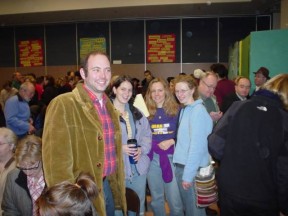 Knox and Pals at Caucus

If the urban block could get out a higher level of participants, it is big enough to win. I am tired of not seeing my values represented. I don’t think they are that out of the mainstream considering every single number one show seems to be about fun, urban folks living the mixed-up life I lead. I want to see ads of racially mixed apartment renters with Ikea furniture going to Sunday brunch with their gay friends. I want to hear dialogue about all of the benefits and hardships that come with living in a city and how we can make cities better and, in that doing so, make America more creative, vibrant, and prosperous.

The Kerry rally was a disaster. The people who spontaneously showed up had their views blocked by the media trucks, and the only music that seemed to resonate with the crowd of college kids was The Black-Eyed Peas. Even as a “victory rally,” it showed a party completely out-of-touch with the reality of its constituents: folks who live in the city and have a crazy mixed-up life. It seemed more concerned about being tame, polite, and looking good on TV in Iowa than having a party. I like Carole King, but for heaven’s sake, she is my Mother’s age. My boyfriend had never even heard of her.

I am going to start writing more letters now, getting involved with folks who are trying to strengthen urban politics, and working to bring my taxes back to the cities where they are generated. And in the next election, I’ll be like Pam and working harder.