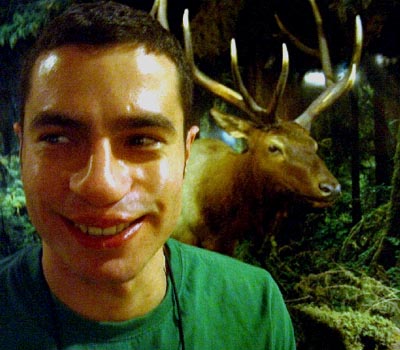 Like deer, Elk (Cervus elaphus) have been increasing their range during the 20th Century. This mainly due to a decrease in natural predators, hunting limits, and an increase in agriculture in areas that traditionally did not support elk habitat. Elk hazing has become necessary in much of their range due to conflict with farmers.

Unlike elk, humans can use the Internet to obtain a wide variety of needs. Ordering food, arranging accommodations, and finding boyfriends are examples of using technology that elk cannot do. I met Victor Chudnovsky on a business trip to Boston in February using technology. I did not know at the time that he ran with elk. Vic is a software engineer and spends his days hunting bugs. His Ph.D. in theoretical physics from MIT has done him little good in cribbage, and he often misses the train. However, he is developing a new research project to study the use of Andrew Lloyd Weber’s music as an elk deterrent. This research could have broad implications, not only in reducing the conflict of Elk/Human interaction but in the social impact of broadcasting “musicals” throughout much of the upper Great Plains.

As far as I know, there are no elk in Argentina. However, the world’s second-smallest deer lives there and is endangered. Vic is originally from Argentina. He speaks a sing-song Spanish that sounds like the birds of May. Elk generally make grunting sounds and, during the rut of October, bellow. This bellowing is used to intimidate competitors. Vic is merely a sexy Jew.

Vic currently lacks a totem animal. Perhaps after one lives on the East Coast long enough, you lose the instinct for such things and instead get a small house dog to relate with. Vic does not like pictures of him taken with elk. He is timid. My totem animal is the otter. I guess I like to look at pictures of Vic in Speedos and on the beach. He is a very ungraceful swimmer but an effective sunbather. He shares this characteristic with elk.