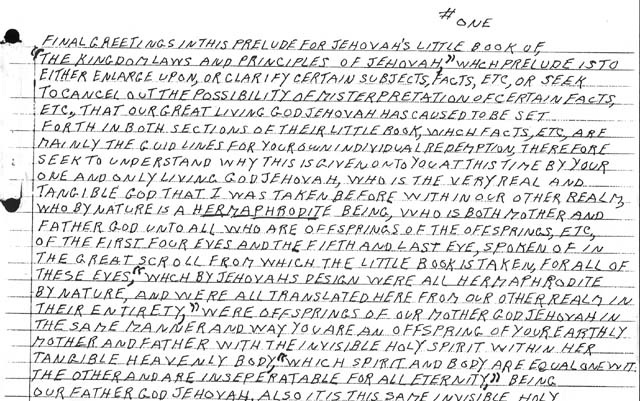 Most of my friends know my Grandfather Lyle as “Bigfoot Grandpa”. He was after all a Bigfoot hunter. He had a theory that Bigfoot bones could never be found because when Bigfeet got tired, they went to the top of a mountain (this location changed) and were taken away by aliens. He had lots of theories.

He worked for a while alerting folks that mattered about the presence of Factor X. Factor X is the secret behind the flying carpets of Baghdad and is being repressed by the government and the auto industry. He thought that perhaps the Basques were the decedents of the sunken city of Atlantis. He believed that the Hopis were the lost tribe of Israel and that the Grand Canyon was caused by a cataclysm of God.

He could witch for water.

I only got to know Lyle in the last several years. I’d fly down now and again to visit him and his wife Bea, at their trailer in Northern Arizona. He built a small shed out back to “conduct his experiments” and had an old locked camper that functioned as his office. On my last visit, he actually had me join him in his camper and pulled out some maps of old mining claims he used to work in the Trinity Alps. People were not really allowed in the camper.

He sent out photocopies of long handwritten treatises. He only made it to fourth grade, so they were written in all caps without punctuation on large, hand-ruled sheets of paper. Each had a mysterious distribution pattern: churches, politicians, family. The last one I was not supposed to receive until after he died. He sent it only to the women in the family.

This was “The Little Book of Laws,” the true religion as conveyed to him by angels. In the Laws, God is a hermaphrodite and we are descended from a quasi-Amazonian band of women from outer space who battled the Number 10 Class Demons and lived on an island similar to Ceylon. While it is rather homophobic and racist, the vision the angels gave him is very women-centric and affirming. He became obsessed with the Women in Black, who were being arrested and harassed for protesting the Iraqi War. Despite his hip pain and fear of getting pulled over, he drove 17 miles down to Prescott to hand-deliver his Little Book of Laws to them. He was concerned for their safety.

Lyle was born in the Front Range of Colorado when it was still scrub country and not housing developments and smog. During the Great Depression, his parents abandoned him and his little brother, Lester. My understanding is the Lyle kept care of his younger brother and they lived on the road. He never talked about this. This must have been when he stopped going to school. He did farm work. I have a picture of him in a broad hat, roping calves. Last time I was down, I learned that this is a picture from the day he was reunited with his mother because there is a different version on the wall of his trailer. Lester died on the Bataan Death March. Lyle spent part of the war working on the Alaska Highway, perhaps apart from my grandmother Rose, to support their growing family. Times were tough, so they headed to California after the war.

I am not particularly clear on how they actually lived, as I only knew Lyle when he had mellowed. He had odd jobs, kept grudges, and stayed busy with low-level politics. He tried to get the California constitution changed by handwriting a new one on a giant scroll. He always had a mining operation going on somewhere.

I do not know how he ended up retiring in Spokane, Washington. There, he and Rose had a bitter divorce. He must have been close to 70. He remarried soon after and lived in a trailer in Republic with his new wife. After she passed on, he moved to Arizona for the dry weather. There, he met Bea through the lonely-hearts ads. They were married for 14 years. I made it down most recently last spring. Hobbling around a swap meet with Terry and me, he looked darn good for a 91 year-old guy.

Lyle was whip smart. I was telling my Dad I hoped to end up as bright as Lyle when I become an old man. My father told me flatly, “That will never happen.” My last conversation with Lyle was short and he spoke faintly. He said, “There ain’t no benefit to getting old, cowboy.” I don’t know why he started calling me this, but that is all he ever called me in the last years that I knew him. I’ll miss him.

Lyle Regester passed away on the afternoon of November 15th.